Posted on September 23, 2011 by itinerantfling

Since we haven’t blogged as much as we have liked, this post is LONG. Apologies up front for this and we promise to shorten up the text in the future.  If you care to skip over the text of the post and just see our La Fortuna & Monteverde pics, click here, otherwise read on.

Something about Costa Rica you should know if you ever come here, if you decide to travel by bus, get ready for a fascinating experience.  First, it’s super cheap and “directo” and “collectivo” are the public services that are offered.  Now you might think, that direct might mean “non-stop”, but you’d be wrong, gravely wrong.  “Directo” means that is not simlar to an an inter-city bus service that stops, what seems like, every 30 seconds.  It only stops every 20 minutes.  Our trip from Quepos to Puntarenas, a 182 km journey, took us 3 hours.  this was the first leg of three leg trip that we took to get to La Fortuna. 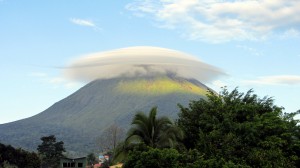 The view from our hostel door, Volcano Arenal

La Fortuna is a small town at the base of the Volcano Arenas which hasn’t been active since April 2010,  (doesn’t this volcano know that I’ve never seen lava before).  In spite of this, we have really enjoyed La Fortuna, stayed in a great hostel which was super cheap; the food has been nothing crazy great, but really good and satisfying; but the activities here have been well worth it even if the price was high. 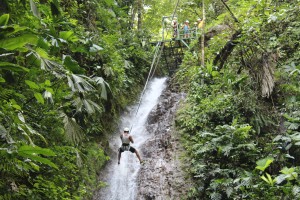 On the first day we completed two activities: canyoning and a canopy tour.  Canyoning essentially is rappelling down an active creek/river.  Rappelling is all about trust; learning to trust the structure and rope that you are attached to is not going to fail, allows you to really go crazy. You flip, you jump, you free fall, and the design of the equipment can literally stop you in a second if you loose control and free fall. it’s an awesome exhilarating feeling, But remember, trust the rope and you’ll be FREE!!! 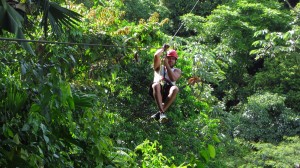 Marcelo zipping through the canopy

The second activity was the canopy tour.  This is a high wire system that can be anywhere from 10 feet to 200 hundred feet off the ground.  The instructors hook you into a system whereby you are attached to a wire and you slide/zip down the wire.  You can actually pick up some serious speed. One of the cables we were attached to allowed us hit around 40 mph. Crazy, seeing that the only thing eventually stopping you is your hand inside some leather glove.  An awesome feeling once again – Marcelo & I both got do do some crazy things:  upside down, and flying tandem with the instructor like superman. 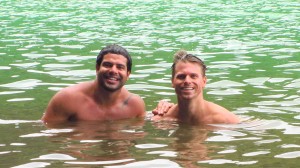 Swimming in the Crater of Dead Volcano

We decided our epicurous lifestyle was not quite satisfying enough; we decided to hike through cerro chato.  WOW, the vertical hiking was quite impressive as it was exhausting.  However, we got to see a large lake that was formed over a dead volcano; water was super green as the algae in the lake colored the water.  The hike provided sense of accomplishment; lots of ups and downs, but worth it.  Next time, remember, MORE WATER.

Next up was our trip to Monteverde national park. We chose to get there by taking a jeep/boat/jeep, which was actually a van/boat/van but who’s keeping track? 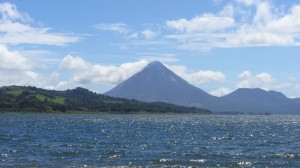 The actual trip was breathtakingly beautiful. Imagine a volcano behind you as you travel across a large lake surrounded by green mountains. 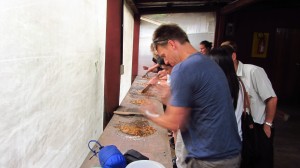 We stayed in a cute hostel in Santa Elena, which also happens to be a tiny town that you can only get to by traveling dirt roads. Only two activities were done here.   First up, a tour of the coffee/sugar plantation.  This was quite interesting and informative not to mention delicious. Our second activity was hiking through Monteverde national cloud forest. In some parts of the forest you could almost touch the clouds. I feel like a broken record, but it’s incredibly unique and beautiful. We even got to stand on the continental divide and saw two streams running in different directions, the Pacific and the Caribbean. 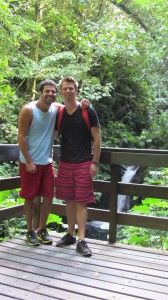 At a Waterfall in Monteverde

Next up we head to Nicaragua.

3 Responses to Adrenaline and Nature