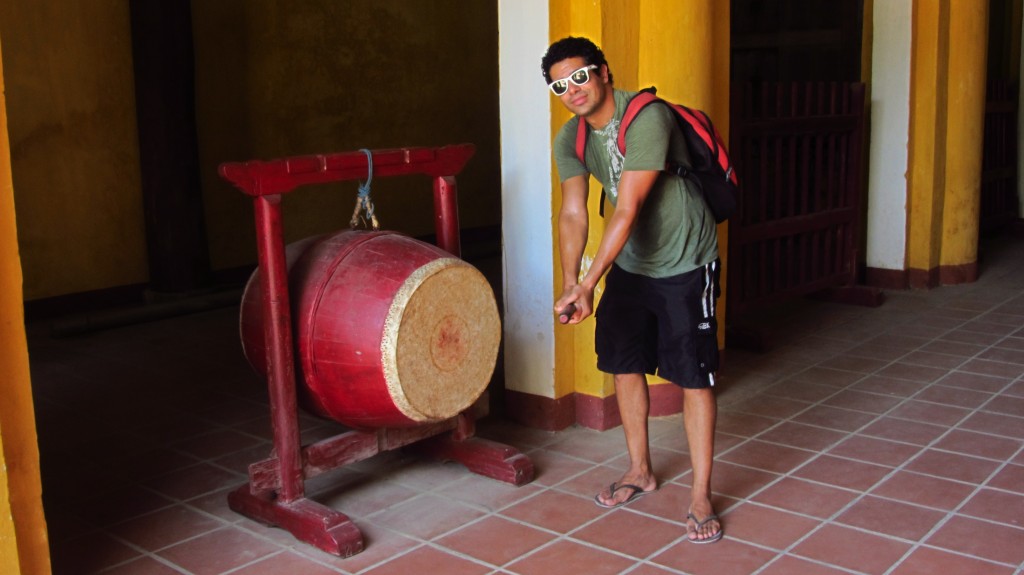 After traveling these past few months we found something that really makes a place special. It is not only the beauty of the place, its architecture or the food. A truly remarkable place has all those characteristics, but also contains the sentiment of the people who live in the touristic area. We want to see the real people who make the city. We want to see what they produce, what they wear, what they listen to, what they eat, their art. That is what makes a place unforgettable. 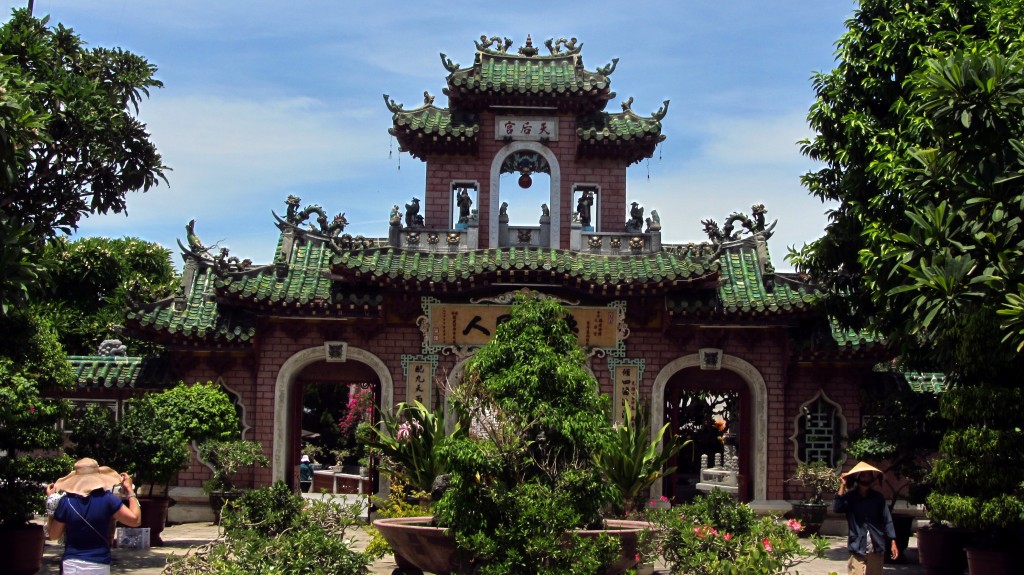 Hoi An, although cute, is a place which unfortunately lacks this. This little town is a jewel with beautiful architecture combining the Chinese, Japanese and Vietnamese influence. But all the pretty buildings are now restaurants or stores and seemingly, no one lives in the touristic part of the city. The buildings are largely intact and people cannot change the outside of the houses because it is a UNESCO sight, but since people don’t live there anymore it lacks a some of that unique aspect. 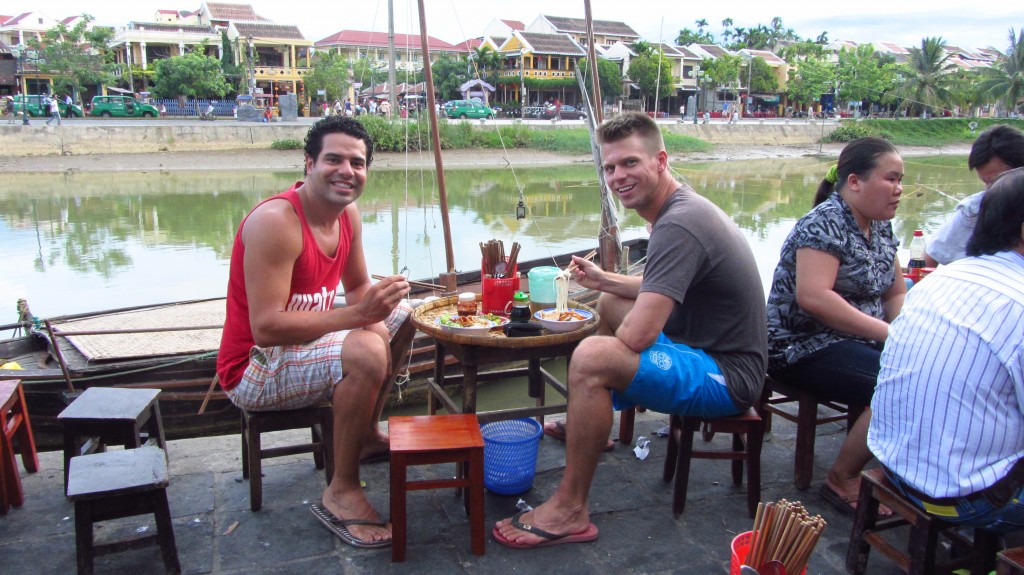 Delicious Dinner by The River

Despite this and how hot/humid it was while we were there, it is a really pretty place. Located on the coast with a river crossing through the city, it is a one of the most touristic places in Vietnam. Loads of people come out at night to the historic town to have some street food and a beer by the river. The little town transforms at night when the colorful paper Asian lanterns are lit up in almost every single house. Some people also light candles and put them in little paper boats on the river and one can rent a little boat and ride in the channels just like in Venice. In Hoi An you can also have local brewed beer in some restaurants in what is probably the cheapest draft beer in the world at only U$ 0.20. I wish it was good, but hey, it’s only 20 cents.
Another interesting aspect about Hoi An is the amount of stores selling tailored clothes. It is one after the other and people usually get out of here with some suits, shirts and pants in their luggage. We skipped on that and took a bus to Hue. 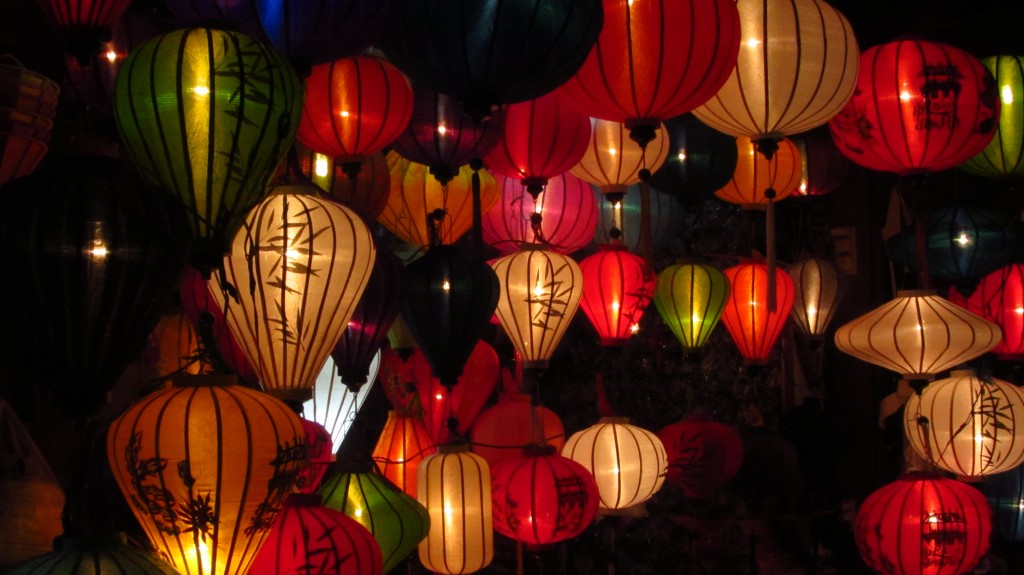 The Lights were Beautiful

Hue was the capital of the Vietnam Kingdom before the Nguyen dynasty was in charge. There is a large citadel in the city that reminds me a lot the medieval times with a moat and gates. The palace is pretty, also a UNESCO sight, but I have to say that was nothing really special. We don’t know if it was worth the visit and after Hue we decided to catch another bus to a small town called Dong Hoi. The 4 hour drive was a true cultural Vietnamese experience. We were the only tourists on the bus that transported a motorbike, a live chicken (tied up but not caged) and way more people than seats. Of course we had to stop in a car shop for repairs. The engine was open, a metal piece removed, welded and put back in. We were waiting for 40 minutes in the bus under temperatures far from mild and nobody complained – a completely normal experience. 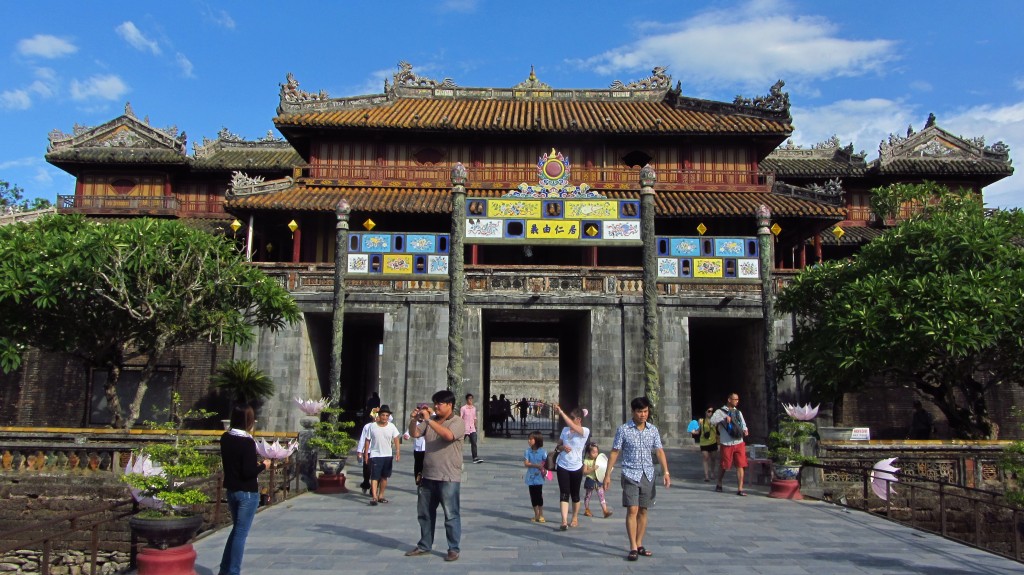 When we got to Dong Hoi we ran into some issues renting some bikes, but after some time we were finally able to jump on them and head to the Phong Nha Area. This area has similar landscape to what we had seen in Laos. The karts formation and the layers of limestone formed amazing caves systems and the water that runs through is blue as the sky. We stayed in a hostel far from everything, but had great reviews on the internet. An Australian dude and his Vietnamese wife run the show here and it felt like we were guests in their own house. 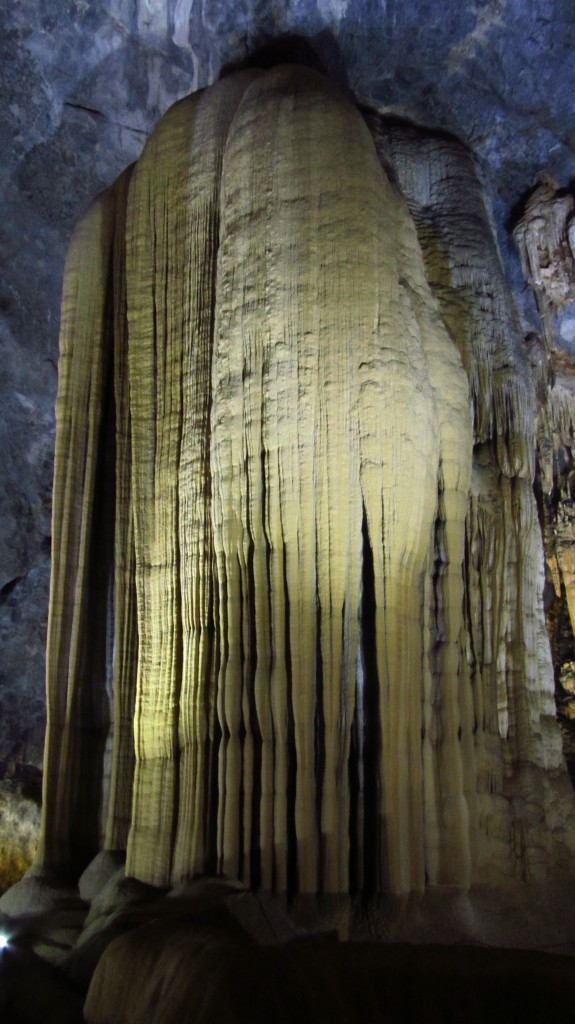 The attraction here are the largest caves in the world. The Paradise cave extends 35 km into the Earth is absolutely incredible. Although the developed area is only 1km in length, the formations are stunning and the cave was the tallest and widest we have ever seen. It feels sometimes that we were in a huge church. They also put some colorful lights that can make it pretty, but are also a little cheesy. After the cave we went swimming in a close by river we  some tourists and played with locals who even offered us some drinks and food. It was a great break from the hot, humid summer day. 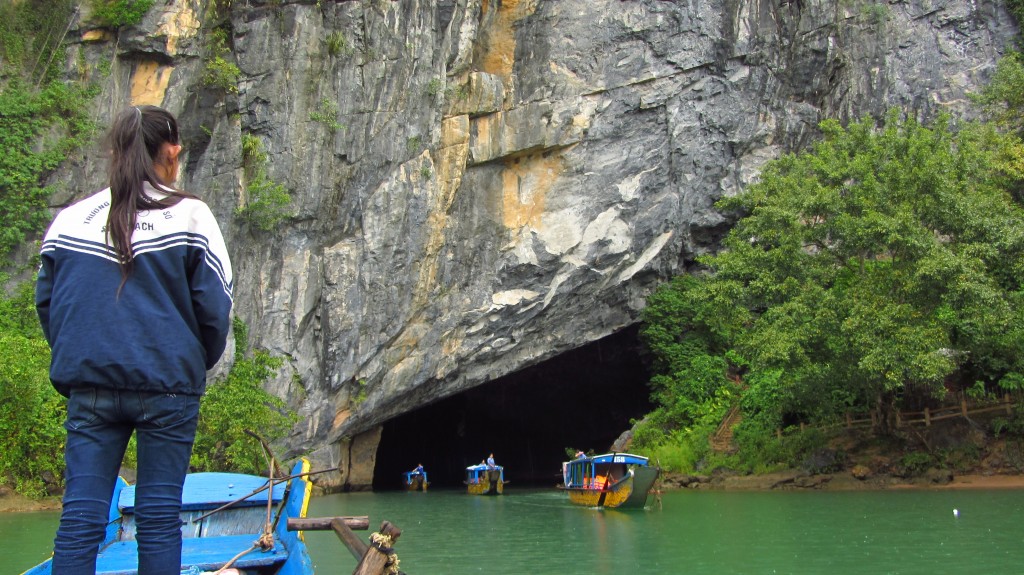 The next day it was another caving day for us. Our last UNESCO sight in central Vietnam, the Phong Nha cave is 7 Km and it is special because the only way to come in is through a boat. Our ride was way shorter than Kong Lor cave in Laos, the boat ride was less than a quarter-mile long, but the cave formations were equally pretty. We were able to get out of the boat twice to walk and see up close the formations that also had colorful lighting. During the war, the Vietnamese used this cave to hide and to store food and ammunition and inside there are some inscriptions that are believed to be more 1,000 years old. 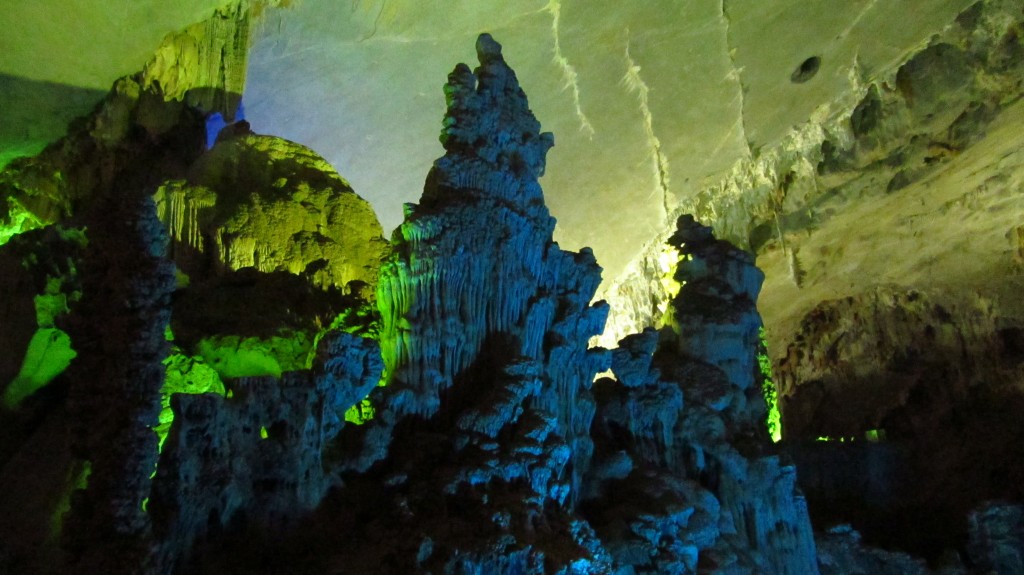 This area was not even in our original itinerary, but it was worth every minute we spent here. How did we hear about it? Tips from other travellers we met in a bar on the beach. Way better than any internet search or Lonely Planet guide-book.
Some pics of the caves here. 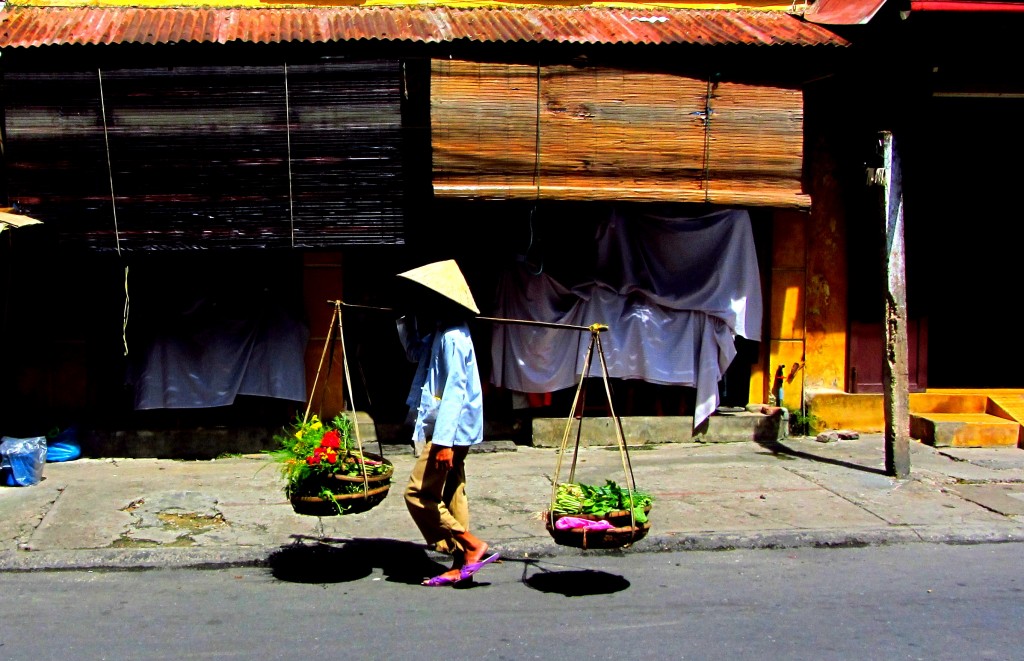 Up Next is Halong Bay & Hanoi

This entry was posted in Vietnam and tagged Cave, Historic, Hoi An, Hué, Moat, Phong Nha. Bookmark the permalink.