Vietnam war from another eyes and a dip in the Pacific 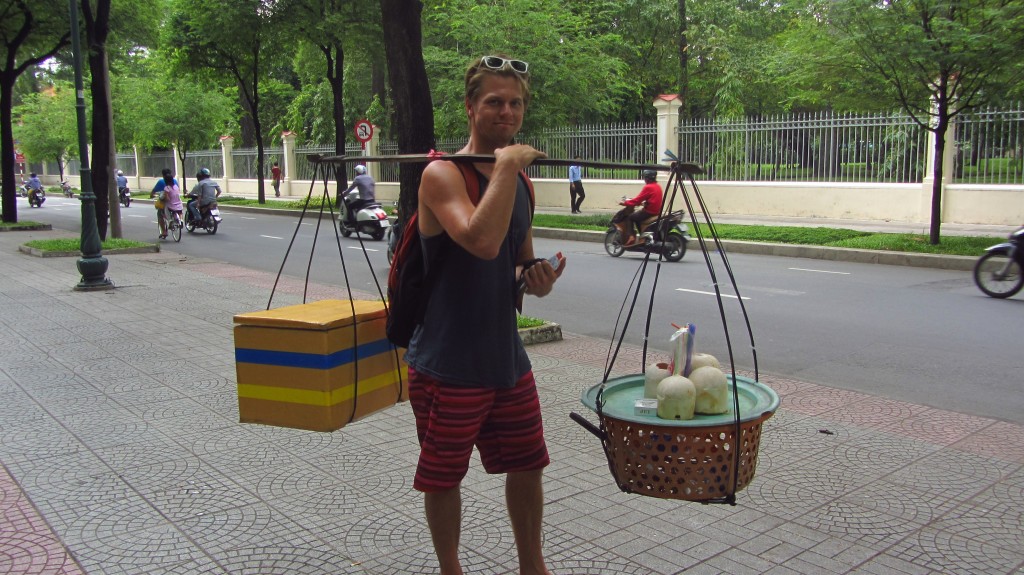 We finally got to Vietnam after a painful journey through Cambodia that lasted a total of 16 hours. And although we had to involve an agency in order to obtain a Visa, crossing the border was relatively painless. As you are driving towards the city, you begin to see the first signs of Ho Chi Minh (HCMC)- dozens of motorbikes. The second, the third and the fourth signs were of hundreds of motorbikes. The roads are wide, the city buses are pretty much empty, and it seems that all 7+ million people own a bike. Very individualistic for the second largest communist country in the world and I am sure Honda and Yamaha love that. Bikes cannot go faster than 25 mph in urban areas and we saw only one accident while we stayed in Vietnam. So despite the chaos, and it is massive chaos, there is an order that works for its citizens.

Prior to the war, HCMC was originally called Saigon (the capital of South Vietnam). It was later renamed after Ho Chi Minh, the man who commanded his country against two of the most powerful countries in the world and who died before he could see his Vietnam reunited under one flag. Despite the destruction that happened for so many years earlier, we could only see the signs of the war in the museums and historic sites. This city is alive, bustling and busy late into each night. 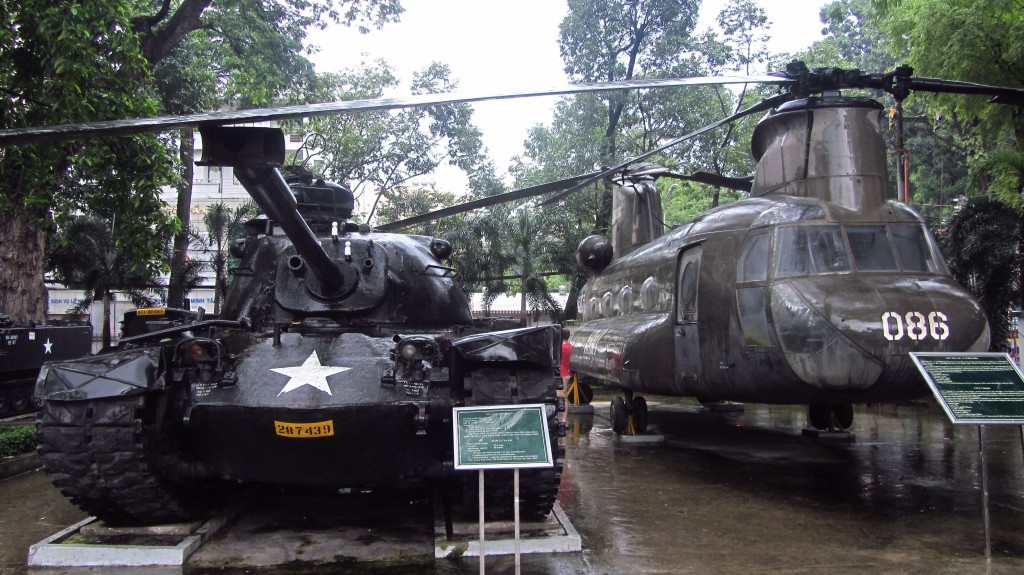 Gifts From the USA

Speaking of history, the War Museum is a must see attraction. Three floors of pure propaganda. The war numbers are impressive especially when compared with other previous known conflicts. The Vietnamese usually list the war as a long conflict that started in 1958 and finished 3 years after the US military occupation in 1975. Dramatic pictures of the war are on display and the human and jungle devastation from the Agent Orange are unforgettable images. Agent Orange is the “gift that keeps on giving” as the effects are passed onto younger generations if parents are effected. Some pictu﻿﻿res made me cry and only served to firm up my belief that war and violence are never the solution for any disagreement. Outside the museum, several “gifts” from the US are on display. The most impressive is the huge helicopter, but the tanks and the planes aren’t far behind. 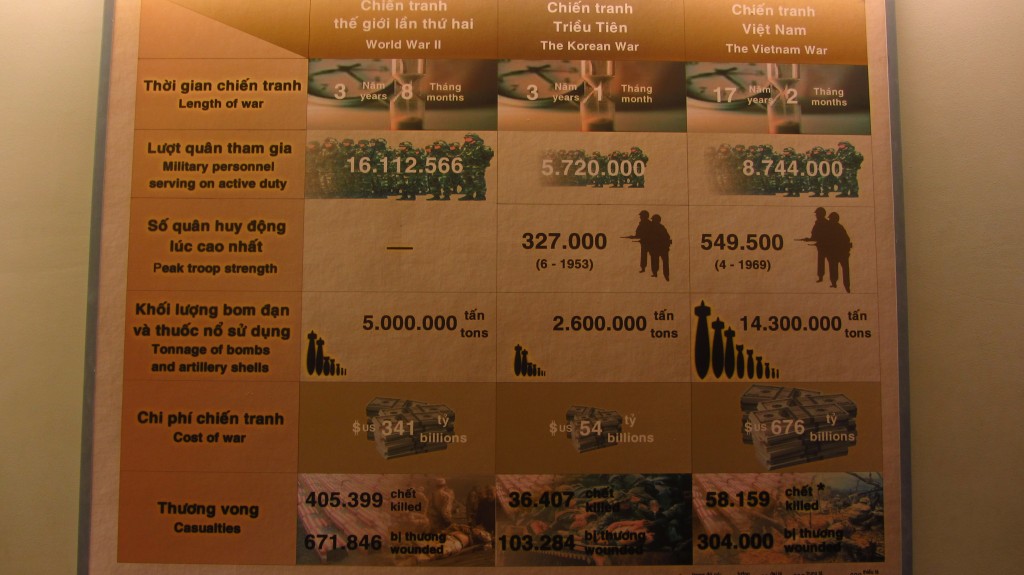 Just down the road from the War Museum is the Reunification Palace which was the president’s office during South Vietnam. We learned that the president of Vietnam had a hotline to the White House in case of emergency. It was interesting because you got to see this building really hasn’t changed since the 1970s. 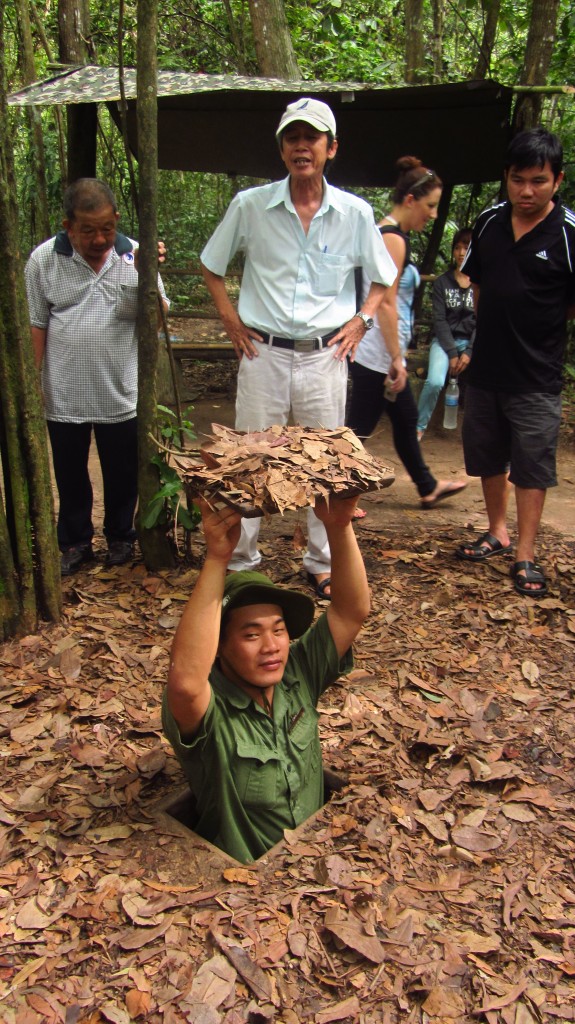 The other main attraction of the area are the famous Cu Chi tunnels. These tunnels are located fairly close to the border of Cambodia and we went on an organized tour with a guide. He fought with the South Vietnamese and the Americans against the North Vietnamese. He was an excellent guide as he used to be an english teacher in a small village, but got tired and moved to the big city and built a tourist company. After the war he was sent to a “retraining camp”, but we thought the retraining he got was not so succesful, because he was not very kind with his words about the one party government. However, he was really funny and for some reason he took a liking to Jason and was joking with him quite often. The residents of the village of Cu Chi had built a fairly complex system of tunnels to hide in and also built traps for the the South Vietnamese and US forces. The official line from the Government was that there were hundreds of i﻿﻿n interconnected tunnels that stretched for miles and miles. Today the﻿﻿re only a few, but our tour guide said that this ‘fact’ was just more propaganda. Who knows what the truth was??? However, we were able to see that the tunnels were elaborate and contained multiple areas where people could stay. There was even a kitchen in one of them. The tunnels have been enlarged for our “western-sized” bodies and we got to pass through them by walking like a duck. Not the most ideal way to transport yourself, but it works better than crawling on your belly like the Vietcong had to do to access the larger rooms. 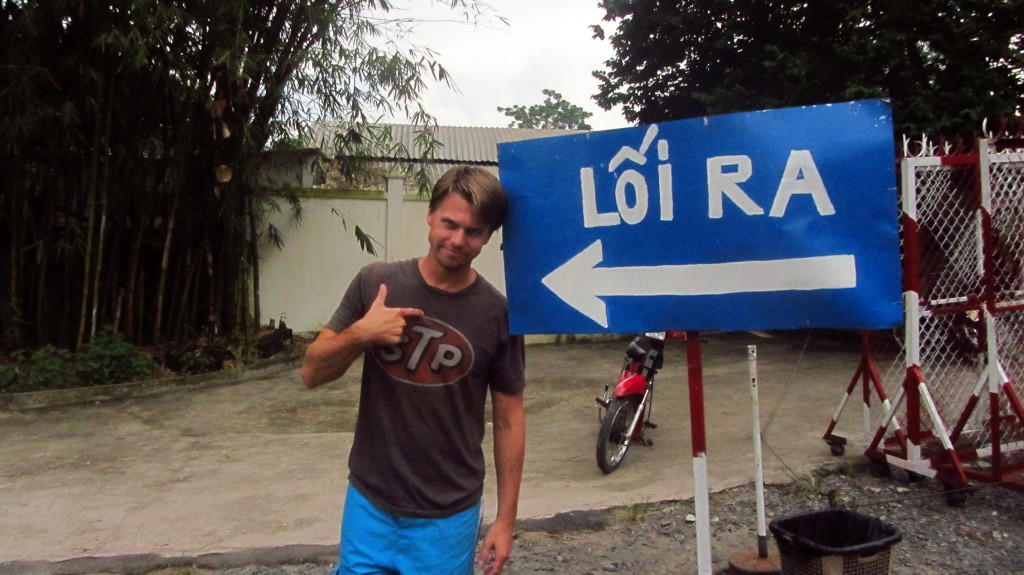 This American Got To Stay

Although the Americans were forced to leave Vietnam in 1975, we were left wondering who really won the war. If this war was indeed fought over different economic philosophies, communist vs capitalism, we have no doubt that capitalism won the war in every single sense. Close to river front malls, Cartier, Burberry and Chanel boutiques sit in a large, clean boulevard overlooking a plaza with the statue of Ho Chi Mihn. The man who knew 7 languages, studied in Paris, founded the communist party in his country, fought two wars to see a united Vietnam free of colonization and truly communist is probably trembling in his open mausoleum in Hanoi. 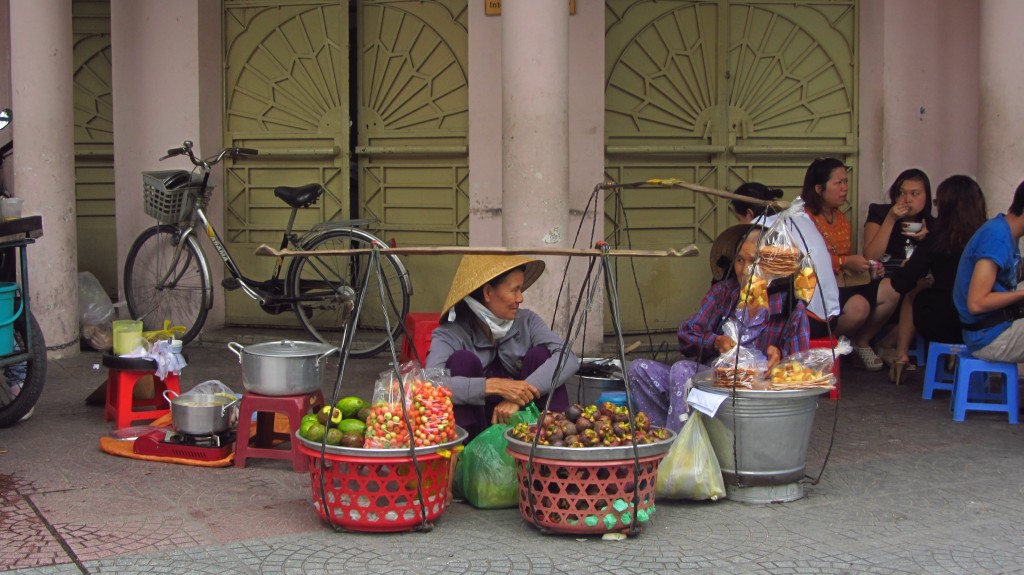 One of the Thousands of Food Stands

The last tourist attraction in the city was the food. If Cambodia did not treat us well on that front, Vietnam did not disappoint us. We found a stand with the best juices we had in the trip. We actually learned from an expat that the place is so popular that early in the morning there is a line of people to get a chance to have it. All the exotic fruits were on the menu and she also made some interesting combinations. Absolutely fantastic! On top of that we had banh mi bo kho, which was a very rich beef stew like soup and one of the best dishes we had on this trip. Everything is very fresh and this seems to be the trick here. 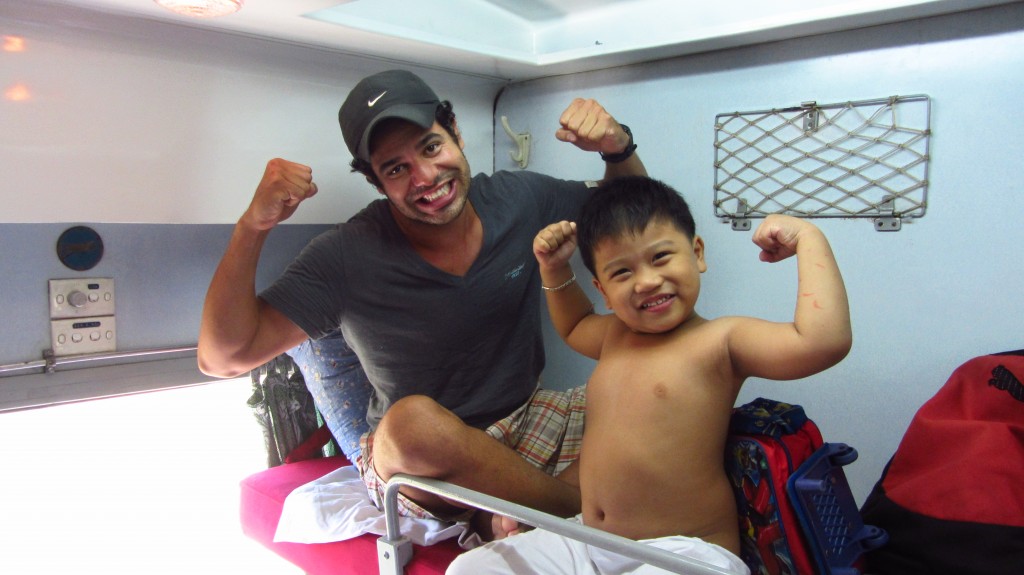 Making Friends along the way to Nha Trang

From Saigon we took our only train trip in a bed cabin that fits 4 people. Jason and I had to go in different wagons, but I made friends very quickly. Our journey was easy. It lasted 12 hours until Nha Trang, a beach resort of Vietnam that is quite impressive. A big town with 300.000 people where the main attraction is the ocean. Locals come and go to have fun on the beach every single day. Packs of adults and children flock the sands at the end of the day and go back home after a deserved bath in the salty waters. This is a LIFE! 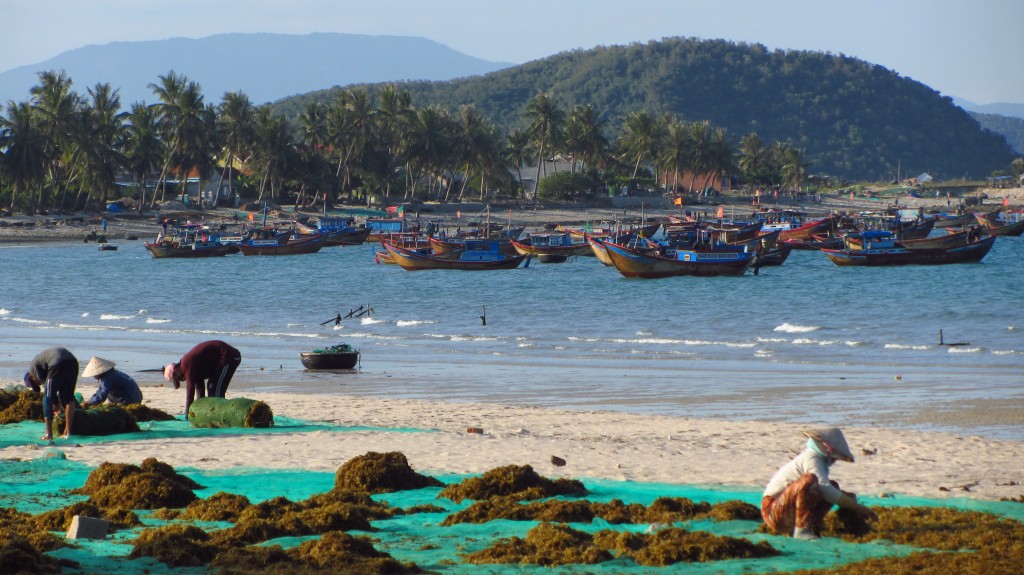 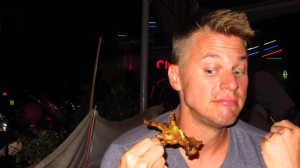 We were surprised with the town. Beautiful mountains and islands laid in crystal clear bule water that reminded us the coast between Rio and Sao Paulo. Of course we rented some bikes and travelled north (50 Km) and South (25 Km) to see stunning scenary away from tourists and even clearer waters. The little towns on the way were very photogenic and the fresh seafood made our trips on the coast the best tour we did in Nha Trang. The other good part of this stop was to meet two americans who are currently living in Nha Tang along with his local friends. They took us along to eat some local treats like chicken feet, pigs intestines and duck egg. The eggs of partially formed duck embryos were boiled (mine even had some little bones) and the taste was not very good. We preferred the chicken wings. Afterward we were invited to eat dog, but it was too late, the restaurant was closed and we were heading north the next day. We did save some puppies and we felt good about it. 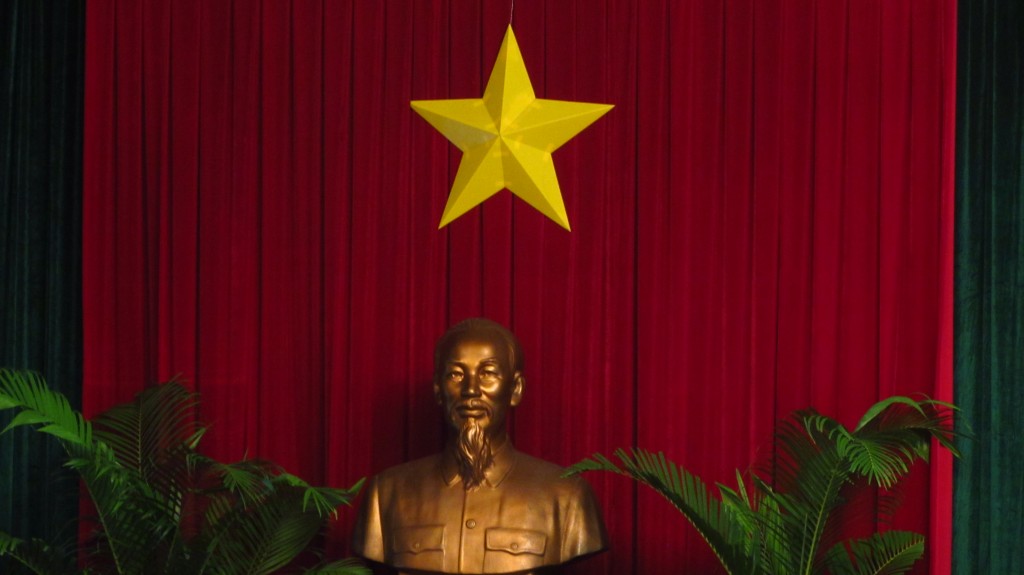 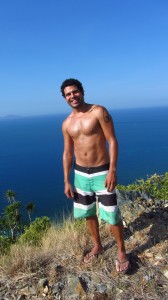 We have a full album of pics of Ho Chi Mihn and Nha Trang, including the bath in volcanic mud. But the last thing we did in the city was paragliding for a few minutes. A memorable experience to see such beautiful city from above along with the birds. It felt like superman!
This entry was posted in Vietnam and tagged capitalism, communism, food, fruit, Ho Chi Minh, motorbikes, Nha Trang, seafood, train, Vietnam's war. Bookmark the permalink.