Sad past, but it is important not to forget 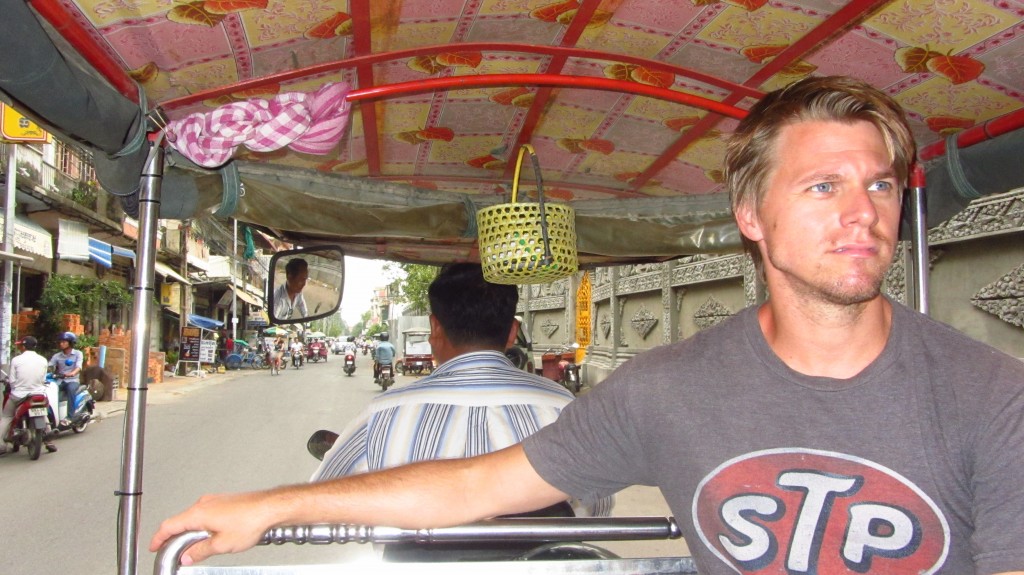 A Gloomy Ride to the Killing Fields

After some relaxing days in Laos it was finally time to head to Cambodia. The trip to Phnom Phen (we love this name) was not the best. It took more than 13 hours and two of these hours were spent at the border just waiting for another bus to pick us up. The landscape was boring, the roads were not good, and it was a slow and painful journey to the capital. 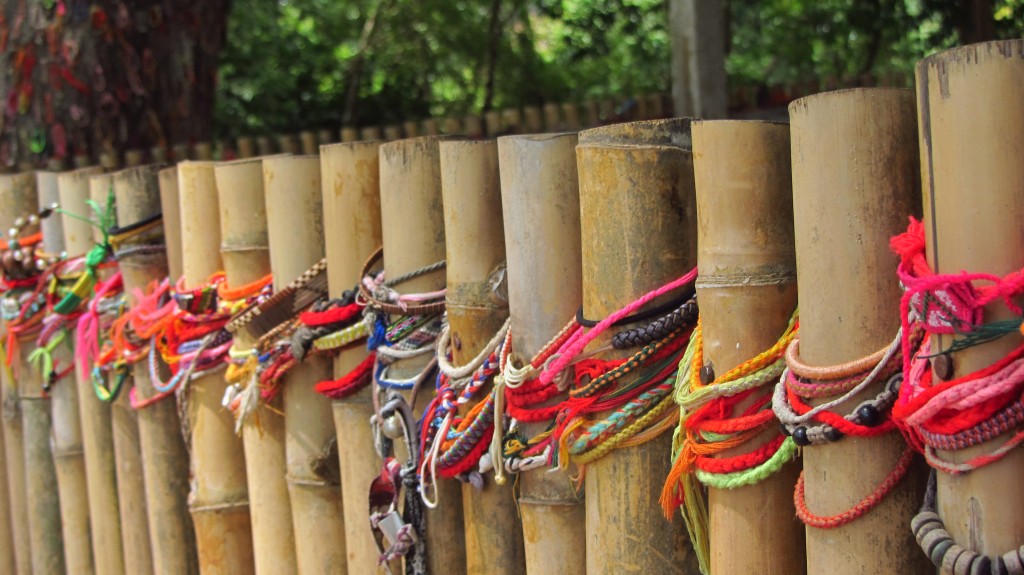 Wrist Bands Left in Remembrance of the Victims

Luckily we met a Cambodian girl on the bus who directed us to a good but cheap area of the city close to the riverwalk. Cambodia is set on the banks of the Mekong river which is now quite wide compared to when we first crossed in the northern Thai-Lao border. And although I am mentioning the riverwalk, it’s really nothing to write home about.

After a good night of sleep we set out to explore the city. Our first stop was the infamous killing fields. Often forgotten by the media, Cambodia endured one of the worst genocides in recent history. Estimates of more than 2 million people or 25% of the country died between 1975 and 1979 at the hands of the Khmer Rouge. The Khmer Rouge was the name of the communist party who took control of the country the at conclusion of the Vietnam War and believed in a 100 % agrarian and pure Khmer society. Pol Pot was the leader of the Khmer Rouge was somewhat like a mixture of Hitler (who believed in a pure race) and Mao-Tse-Tung (who believed in a rural society). 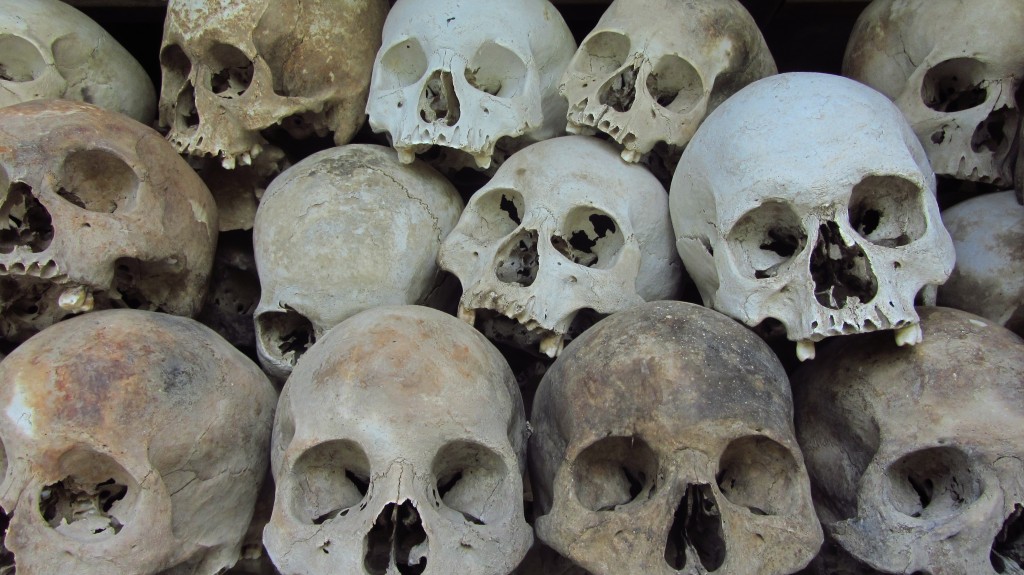 When Pol Pot & the Khmer Rouge took control of Cambodia, they forced people to leave the cities and work in the fields like some century-old marxist books recommended. Those who were against the regime, intellectuals, or those who were of western, ethnic Chinese, ethnic Vietnamese, or ethnic Thai descent were summarily executed. Prior to the executions, all were taken to prisons where they were tortured for days and if they survived were sent to concentration camps and later killed. There were around 300 camps in the whole country. The most known one was a few kilometers away from downtown and it was an unforgettable place to visit. 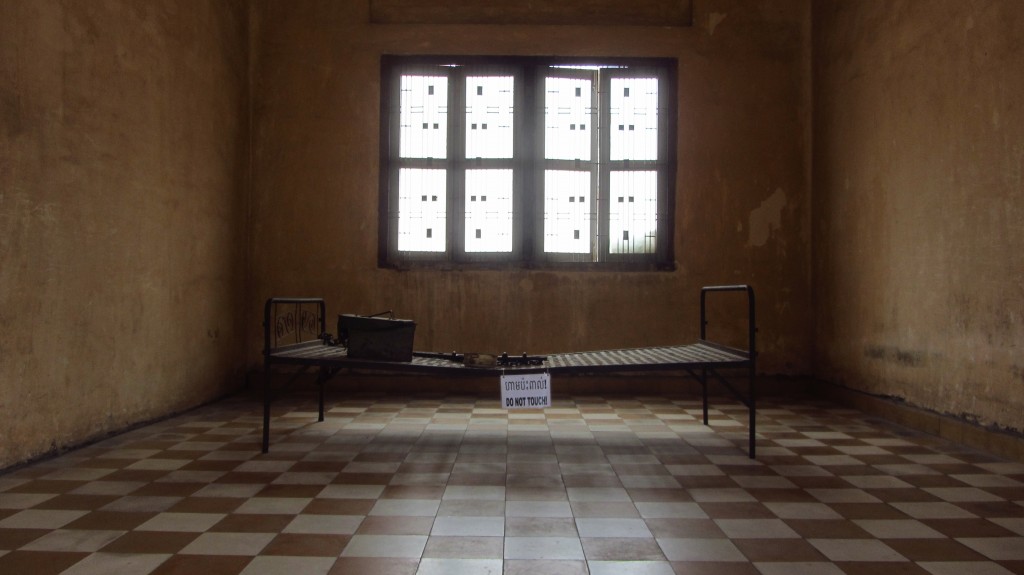 At the site, an audio-guide allows you to move through the site at your own pace and gives the details about how the killings happened. Some of the stories brought tears to our eyes to imagine such immense brutality. The Khmer Rouge did not even use bullets to kill people, because bullets were too expensive. The tools used were hammers, machetes, sickles, metal bars, etc. Babies and young children were killed by smashing their heads on trees and still today we can see bones and teeth surfacing on some of the multiple graves present in the premises. 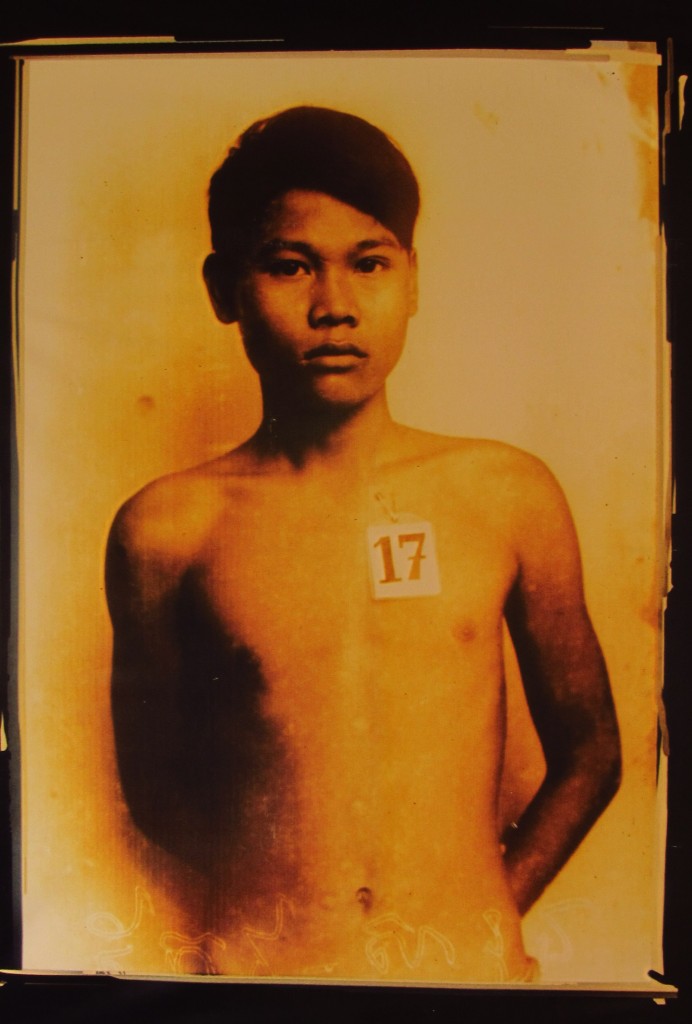 One of the Victims

Today the Killing Fields are rather different. It’s very quiet and landscaped area with a nice monument in the middle where thousands of bones and skulls finally found their resting place. It was definitely a time to reflect upon a massive human tragedy that receives very little attention. We hope that one day people learn more about these almost forgotten tragedies so that we keep them from ever occurring again. 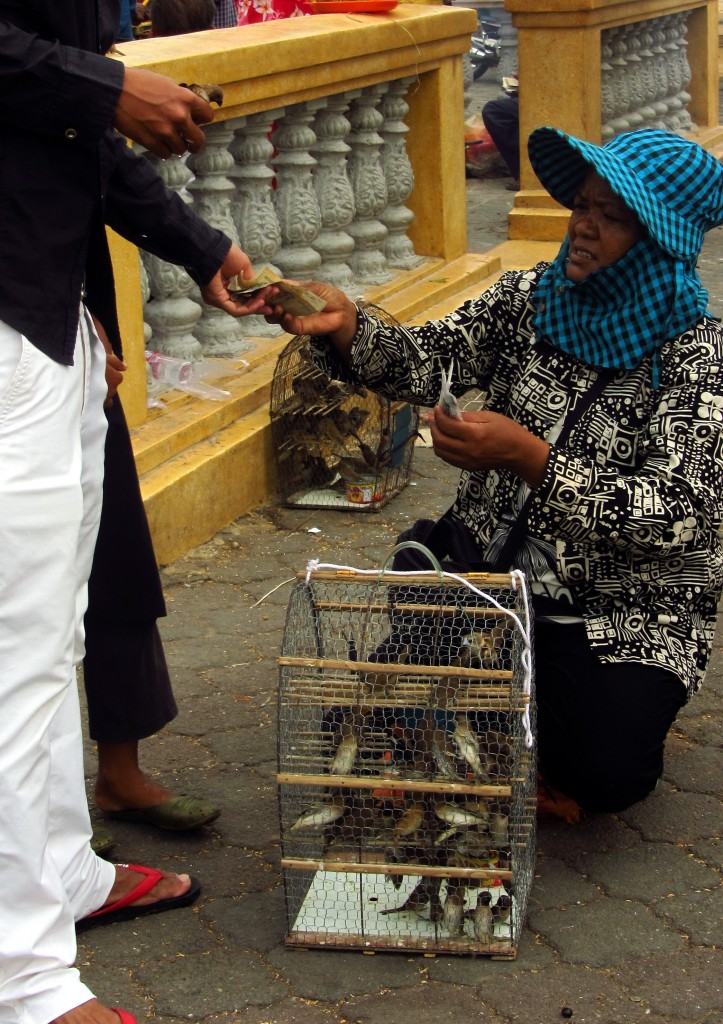 And Yet, The Caged Bird Still Sings....

The next visit was to the sterile S-21 where prisoners were tortured prior to the trip to the killing fields. Once a high school in the center of Phnom Phen that was closed by the regime because the Khmer Rouge believed people needed no education, rather the people needed to learn how to produce agricultural products in the fields as a true proletariat society. Every classroom was replaced by torture rooms and today walking in each one of them with a solitary bed and chains is a difficult and sad sight. Some of the rooms had pictures of the prisoners and it was eye-opening to see how young were some of them. 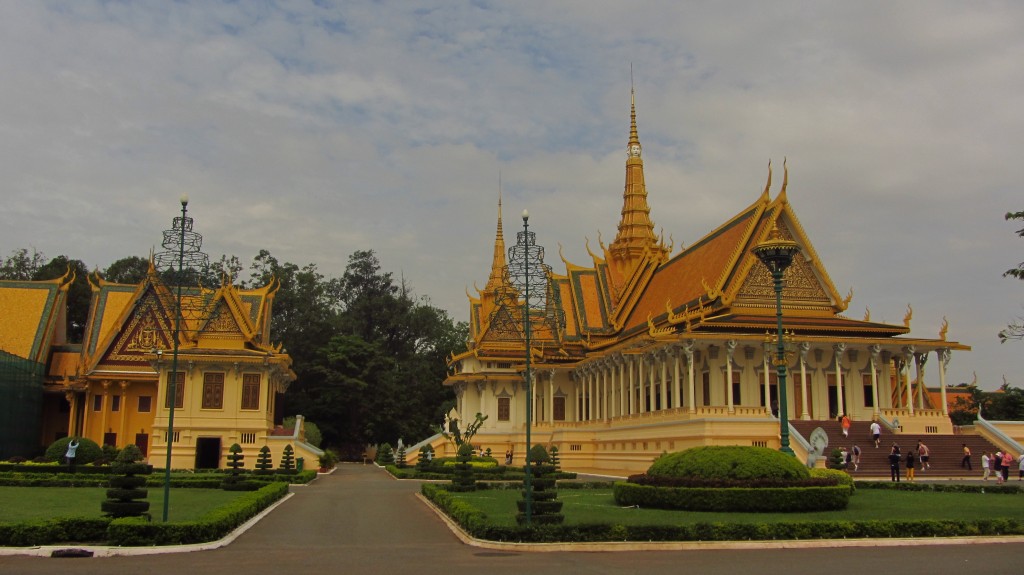 At The Royal Palace

After visiting the main sights related to the horrible regime that affected Cambodia we visited the clean, nice and manicured Royal Palace and Silver Pagoda. Because our hotel was close to a massive temple, the monks were still around and it was easy to see them on the streets collecting food in the early morning. Temples were not any different from the ones we saw in Thailand and Laos where people were praying and offering fruits, incense and other goods. Outside the temples, street vendors sold materials for offerings to the temple attendees. Nothing wrong with this, but one of their businesses was to sell caged birds to the attendees so they could set them free, thus ensuring an attendee good luck. We thought this was a crazy way to make money, but we have heard about worse jobs elsewhere. 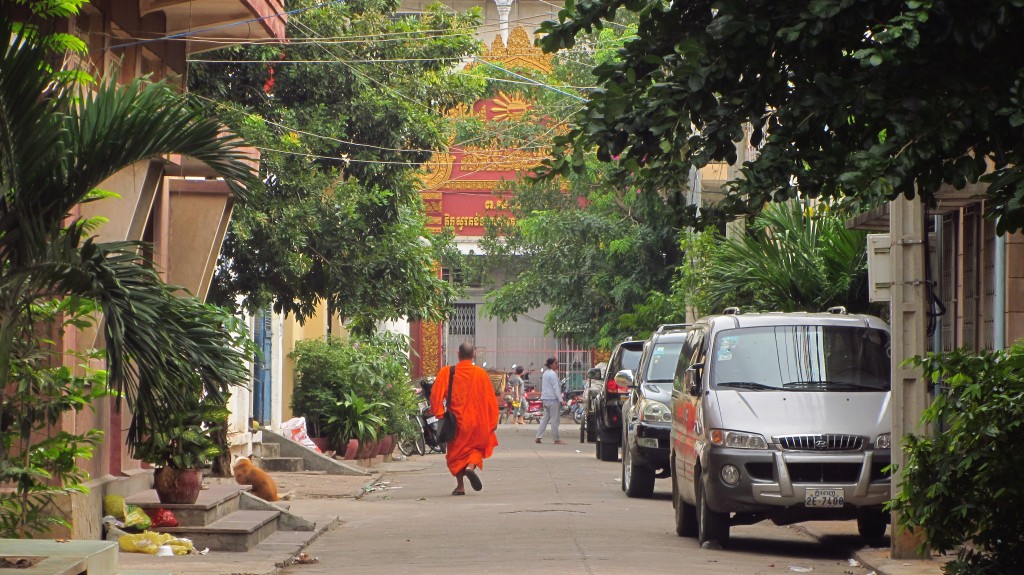 Here in Phnon Phen there is an odd attraction that was offered to us every time we were walking on the streets: shooting machine guns. It’s a little weird to visit a place across the globe and one of the main things to do is to spend an afternoon shooting with a gun a target in an indoor facility . 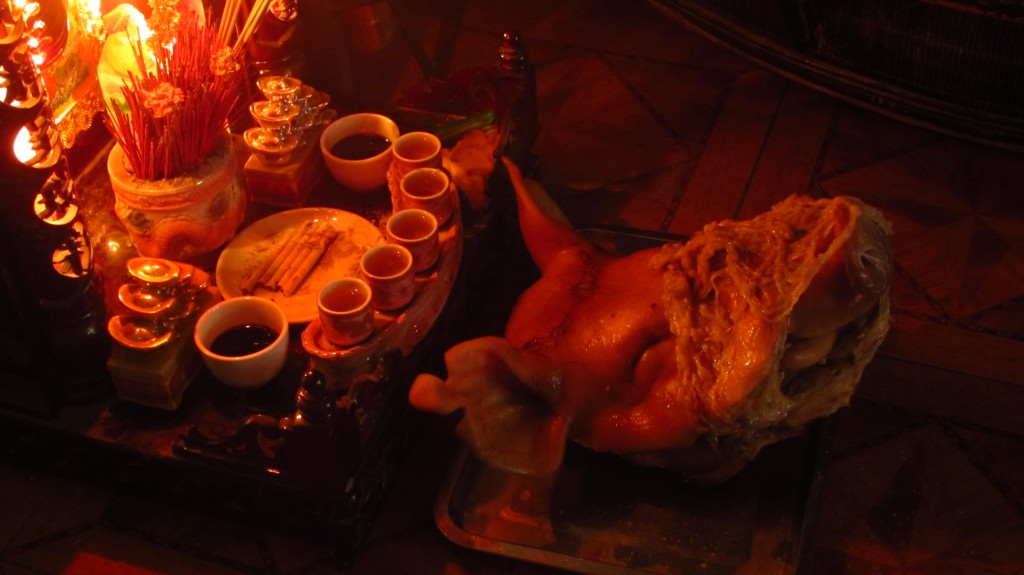 Yep, It's an Offering of a Pig's Head Being at Our Hotel

Anyways, the city with 2.2 million people, the largest of Cambodia, is a bustling commercial metropolis and a nice way to ease yourself into this new country. But it felt too touristy for us and the constant and annoying people on the streets bothering and offering tuk-tuk rides, prostitutes, shoooting and marijuana was not the sight we wanted to have when looking for a nice vacation. We often asked if we could do all together at the same time, but no one was able to provide anything like it.

Up next is Angkor Wat and Siem Reap