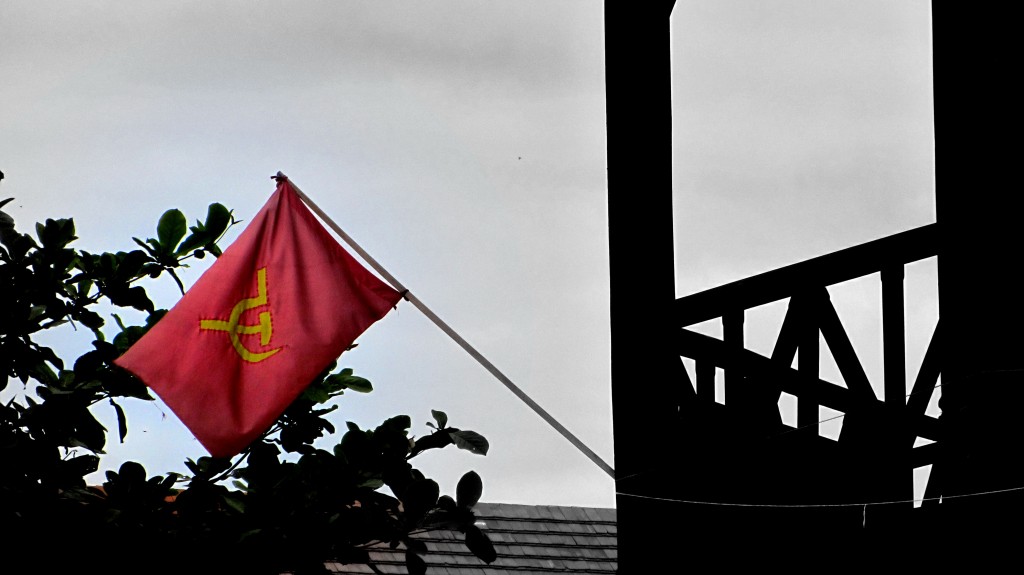 A bit about the title – Sabadee & Korp Jai Lai Lai – these two sets of words (spelled phonetically) have been some our favorites during our Asian adventure.  They mean Hello and Thank you very much. 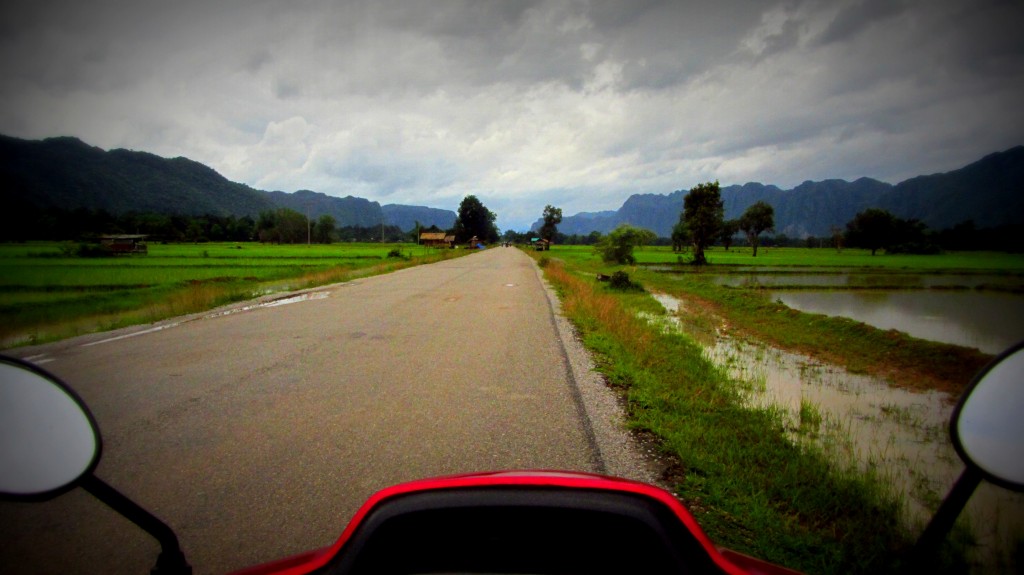 A View of Rice Fields from our Motorbike

Laos has been our best surprise during our trip and we are really glad we came now. Laos is a country some people don`t know exists and originally, it was not our plan to visit. But because its proximity to the 3 giant magnet tourist destinations, it made sense to do some research and check out what it had to offer and man, does it have a lot to offer. Scenery, culture, and a sense that the hours and days last longer made us want to spend more time here. The people are not in a hurry and just want to socialize and have fun. Afterall, why work so much if we can enjoy life right now even here, where people are not well off financially? 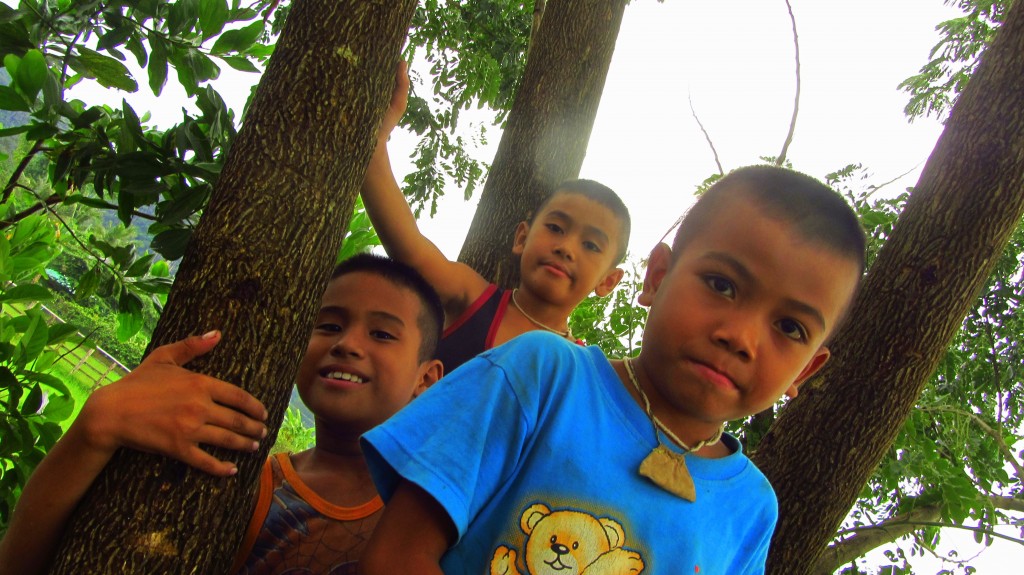 A lot of people don’t know this, but along with China, Vietnam and Cuba, Laos is part of the last group of communist countries in the world. Besides the red flag with the hammer and the sickle and the lack of large stores and chain restaurants, the life in Laos did not seem to be what a typical person would consider a Marxist country. Mercedes, Honda and a lot of Toyota cars can be found in the cities, Coke a Cola was ubiquitous and it doesn’t seem that people are oppressed. It has all the characteristics of a very poor rural country and, as a matter of fact, Laos is one of the poorest countries in the world 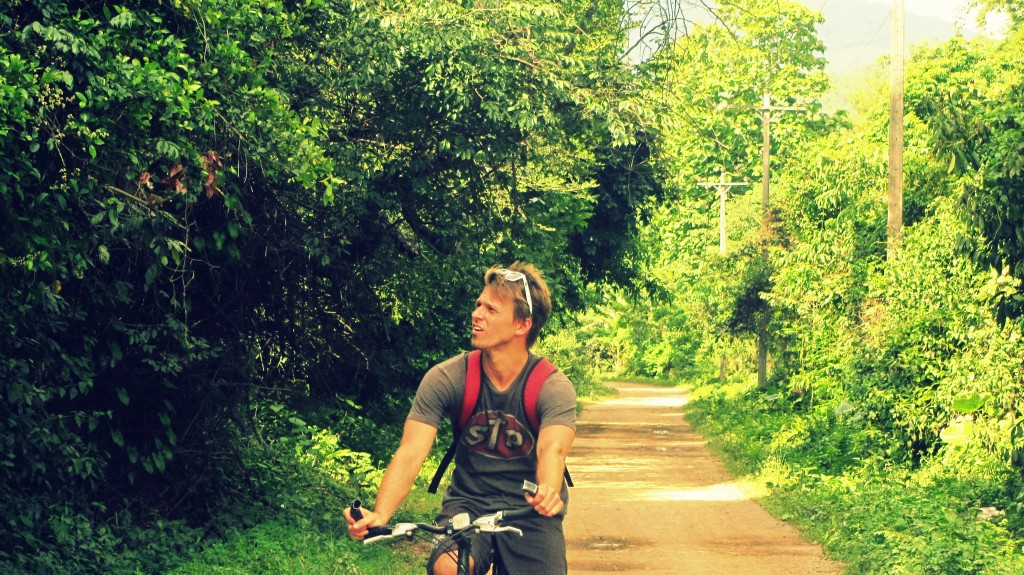 A Bike Ride in Northern Laos

It is approximately the size of Great Britain but with only 6 million people without many urban areas. Laos’ GDP is one the smallest of all Asia both in terms of size and per capita. There is a saying about the southeast asian countries: “the Vietnamese grow the rice, the Cambodians watch it grow and the Laotians listen it to grow.” And that seemed to hold true while we stayed here, although we saw a lot of them working in the never-ending emerald-green rice paddy fields from the north to south . 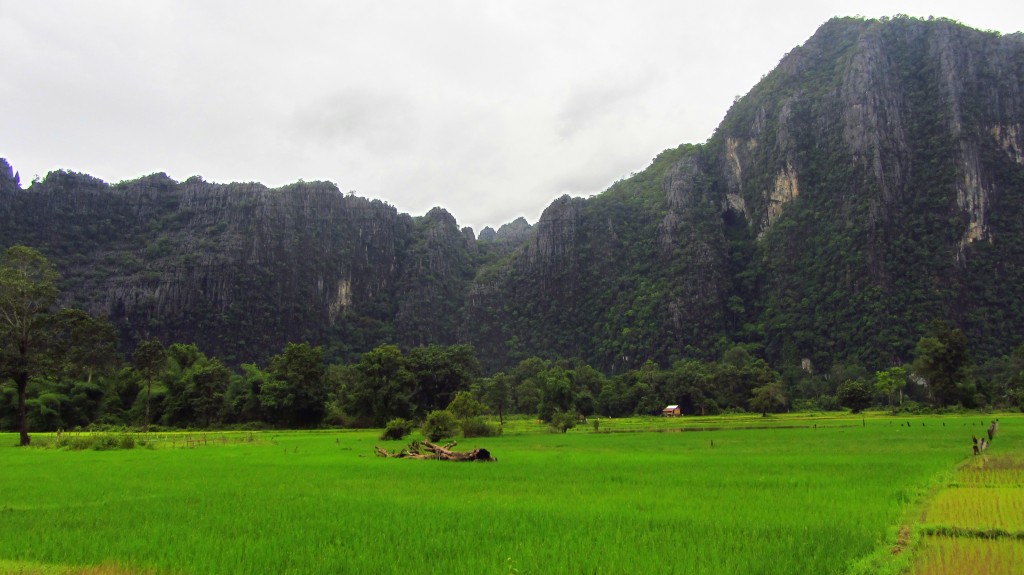 Essentially a buddhist country, the communism here did not seem to affect the religiosity much. There are temples in every town and young boys are supposed to be a monk for a few years and live with other monks, dress in a saffron robe every day, learn more about buddhism, pray and stay away from materialism, trying to reach Nirvana. As we’ve learned, some of them are happy to get out from small rural towns and come to have good education and better living conditions in larger towns. In Luang Prabang some want to learn english and practice with tourists and it seems to them that we are as exotic as they are. But we agree that the sight of monks walking around the city with their orange umbrellas is exquisite. 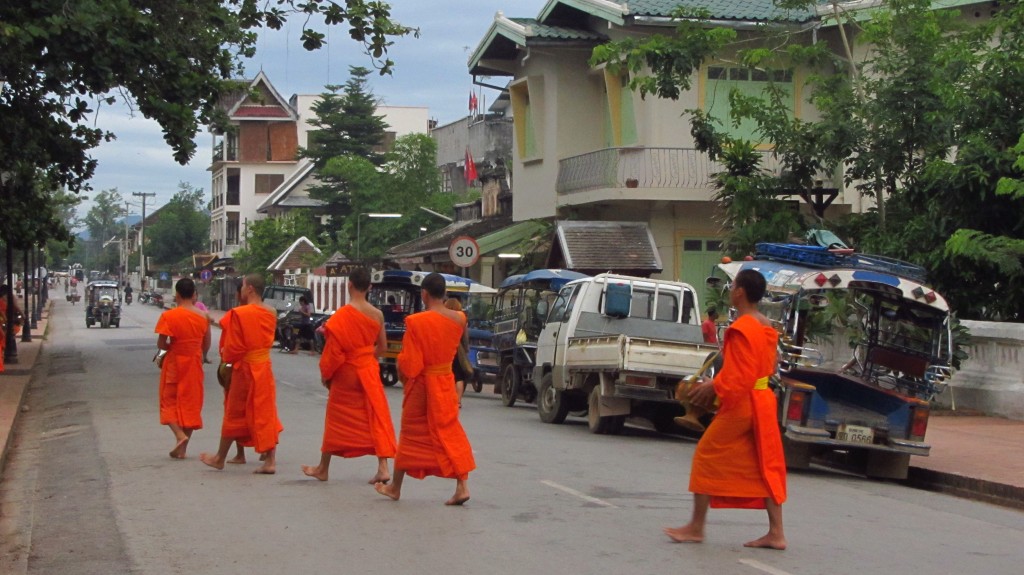 Monks out for a stroll

It is hard to believe Laos still exists. A landlocked country surrounded by very powerful neighbors, Laos was attacked by them all while its existence. China, Vietnam, Cambodia and even the distant France have already invaded this piece of land where the mighty Mekong river makes up most of its western border. We are glad Laos is around, it’s kind like a melting pot where the language is very similar to Thai, the people look somewhat chinese, the Vietnamese hats are all over and it is easy to spot the most recent occupation with the cute french houses, large boulevards, the baguette and in some towns people even play petanque. 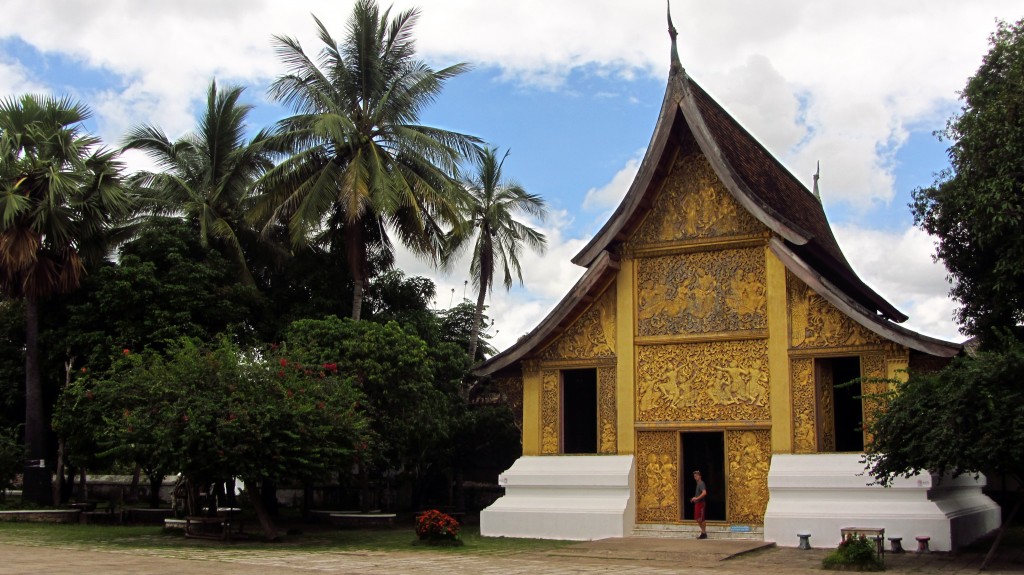 The landscape in the north is breathtaking with large mountain chains covered with thick green forests where the far south is more flat and less stunning but the Mekong is larger and stronger. Throughout the country, its people are the best treasure. Humble people, always smiling and very curious about us and how much we like Laos. In Laos you hardly need to bargain for something, because they don’t usually artificially increase the price for tourists, like the other countries do in the region. 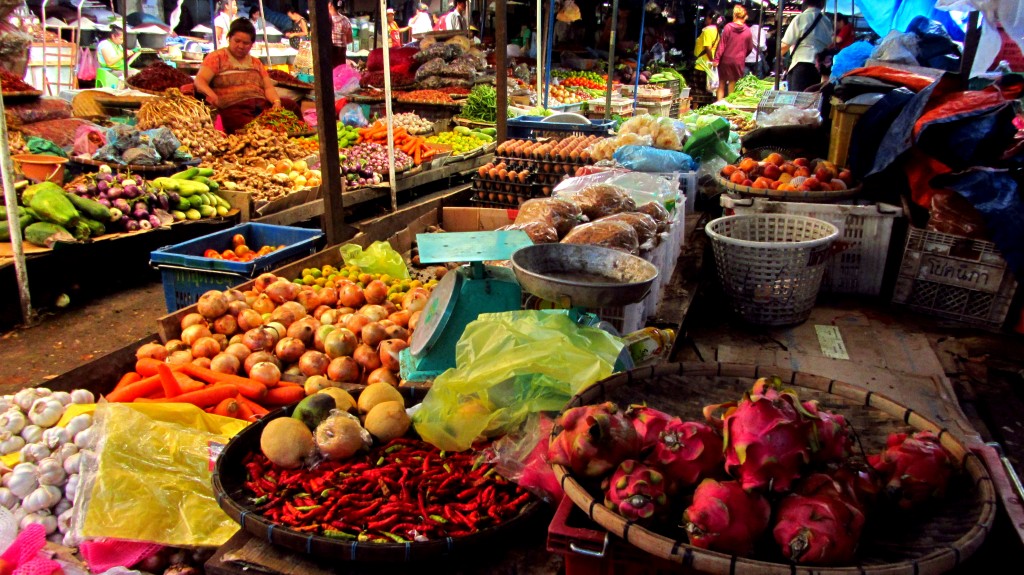 The food was excellent, especially in the north and center of the country. Dishes we did not even know about like the dried buffalo skin, fried river weed and the delicious banana flower salads were very exotic and mouth-watering. We are also going to miss the best refreshments in a hot summer day, the fresh tropical fruit shakes.
And of course, Laos has a treasure that should be the envy of all people in these countries who are known to provide watery-tasting beer – Beer Lao is, by far, the best we have had in this region. The dark version was even better and it cost from US$1-2 a 600 mL bottle. Their currency is called kip and US$ 1 is worth about 8.000 kip. English is spoken only in large touristic cities. In smaller towns can be more complicated to buy a bus ticket, get a room or eat in a restaurant. But, hey, we are the ones supposed to learn their language. Prices are very low and a meal would cost usually around US$ 2-3 and a budget hotel room was less than US$ 15 with AC and WiFi. 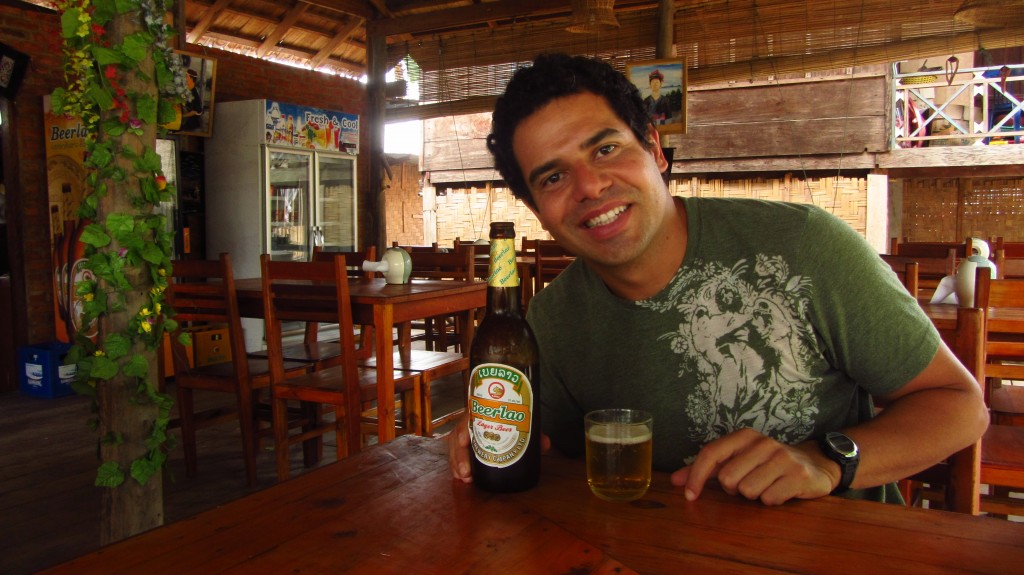 I want to Return

For a country we did not even plan to come, we ended up spending a total of 17 days and we are so glad we came to Laos now. We believe that the country will be changing soon and become more westernized and more capitalist. China has also been investing a lot of money and although the buses were always late, the chinese built roads were mostly impeccable. In the future, Laos will hopefully strike a good balance in accepting foreign investment and preserving their beautiful environment . Today there is a lot to see here, but soon it could change, so the time to see it is now.

This entry was posted in Impressions by country, Laos and tagged communist, food, Forest, Monks, mountains. Bookmark the permalink.