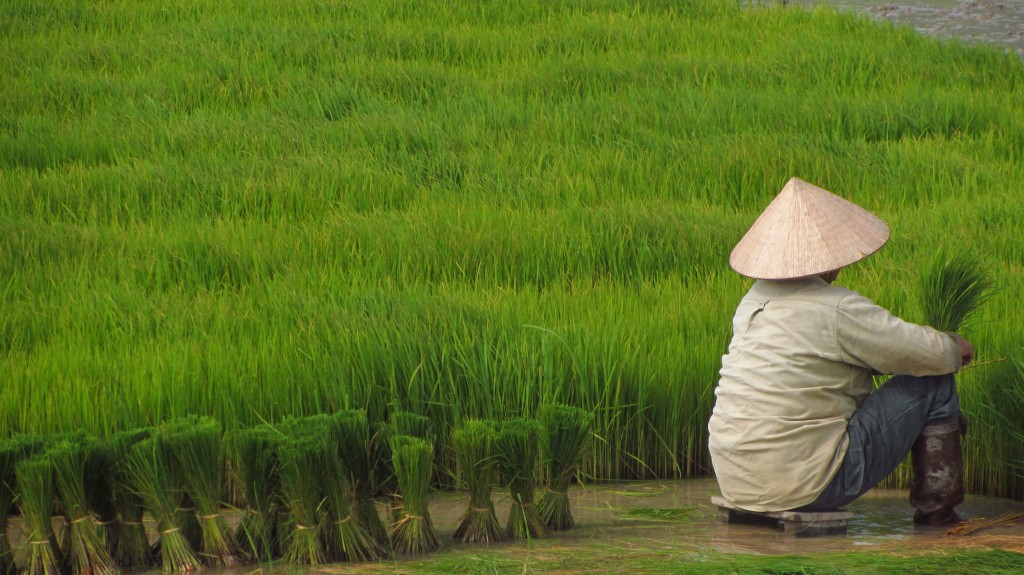 We embarked on a long bus ride from Chiang Mai to the border with Laos, so long that the border was closed by the time we got to Chiang Kong. Our last day in Thailand was nothing special and we went to bed early so we could get to Laos as soon as they opened the border in both countries. Our journey into Laos began crossing the mighty Mekong river in a tiny little boat; we would follow it all almost all the way down to the ocean. We got our VISA on the other side and we headed to Luang Nam Tha, a small town in the northern section of Laos. 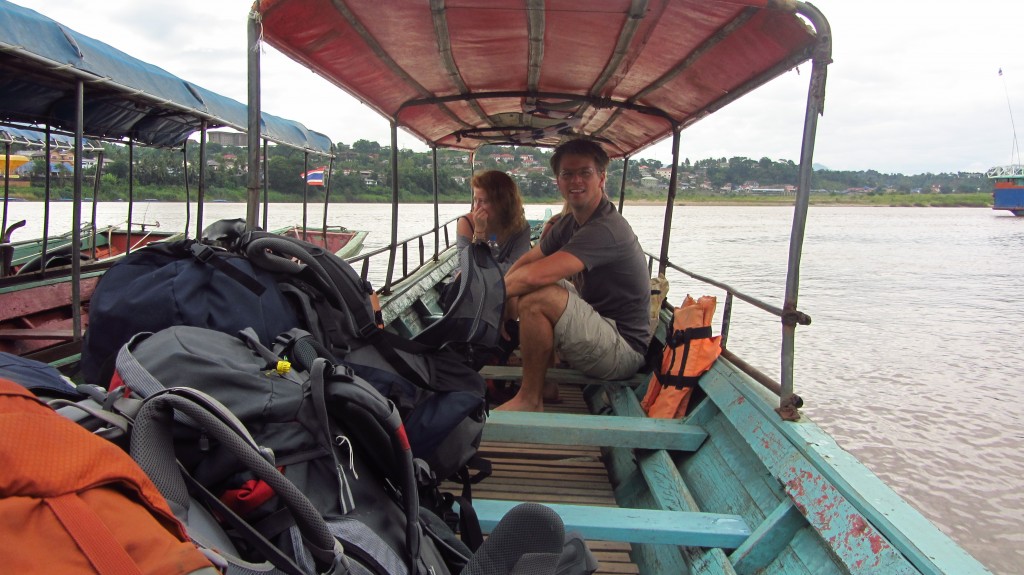 A Short trip to Arrive in Laos

The contrast of the two countries was evident. Laos was a lot quieter, very few cars on the streets, houses were very modest and fewer business along the way. Our 6 hour drive in a van was a nightmare for people with motion sickness. We drove through some lush green mountain passes as the roads curved back and forth for most of the trip. You had to stare off in the distance just to keep from having nausea. 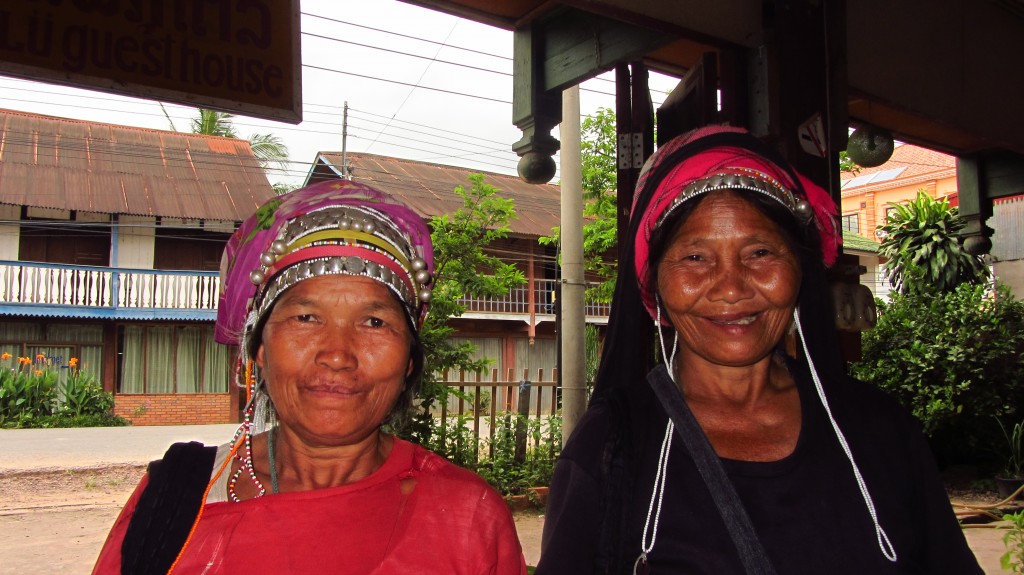 We originally came to this town because they are known for its trekking through the Nam Ha biodiversity conservation area. This was the fourth time we have had an opportunity to trek in a Jungle/Wildlife Area and we decided against it. We eventually talked with another couple that chose to complete the 3 day trek and hearing of their experience made me glad we stayed in town: bugs, mud and monsoon-like rain combined with extreme humidity, and thick forested jungle that needed to be hacked away by a machete. 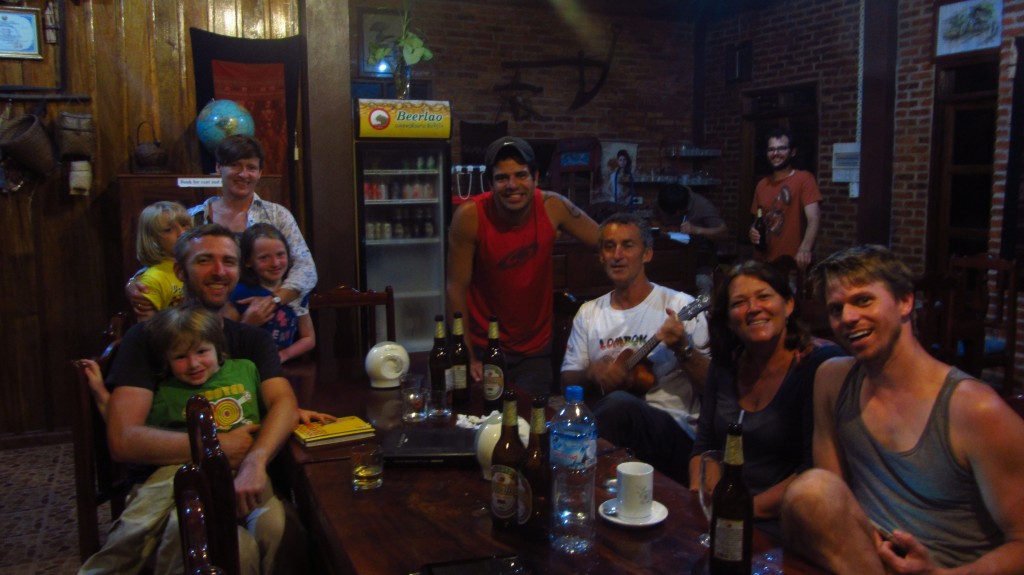 However, Luang Nam Tha was fun in other ways; we celebrated my birthday with a great group of new-found friends: Two couples, one from Australia whose 4 children were already older than 18 yo and another couple from Ireland traveling with their 4 children, the eldest was 12 or 14 and their youngest was 5. This may not sound unusual to you but for us it was because most of the trip we have been surrounded by kids that have been in their late teens to late twenties. 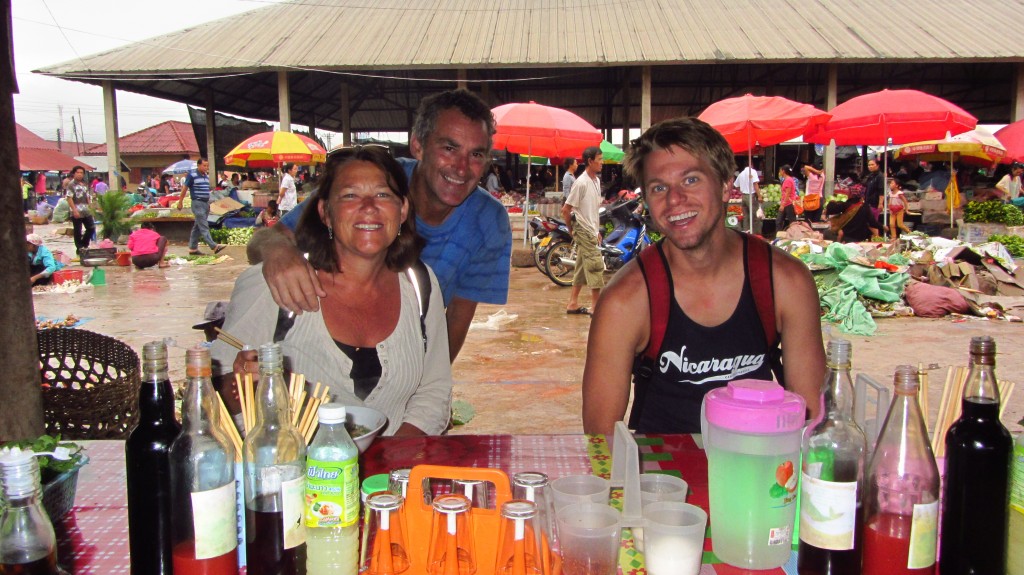 At The Market In Muang Sing with Leean & Paul

We met these couples at a really nice guesthouse right in front of the town’s night market, which is where everything happens. Each night we took a jaunt over, perused over the nightly offerings and sat down with the locals and had a great meal. 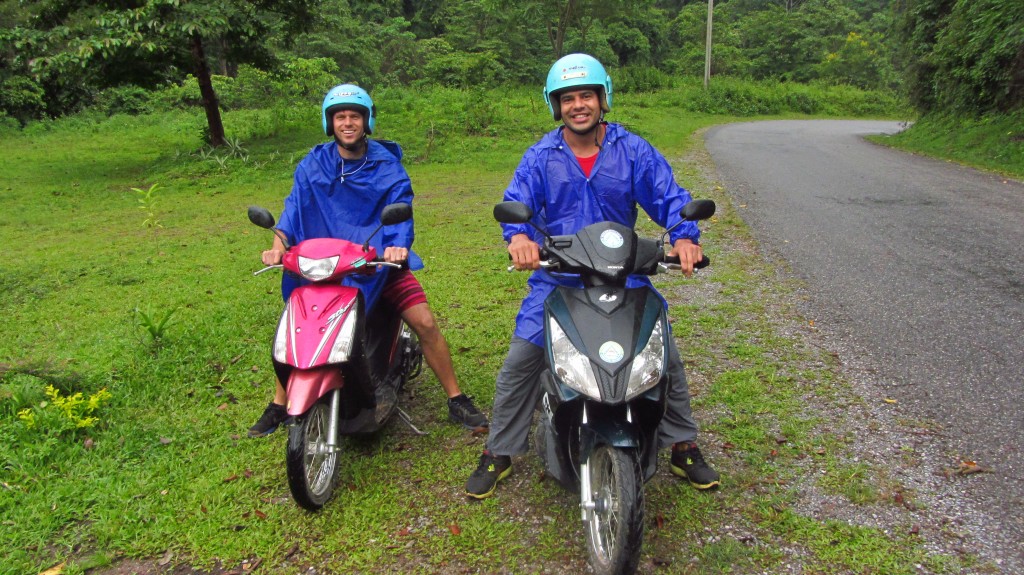 Avoiding the Monsoon While Scooting Down the Road

We also took a side trip to Muang Sing, a small town 10 Km to the China border (we keep approaching the Chinese Border but just can’t quite make it in), by motor-scooter with the Australian couple. This trip was cut short due to the rain but the drive was exhilarating and it almost made up for our lack of trekking ambition because the road runs through the northern part of the biodiversity area and it’s really beautiful. During the very early hours in Muang Sing there is one of the most interesting markets with have seen. That is when the local tribes in the area come to sell their produce, but what caught our attention was the meat section with frogs, eels, chickens and the more than fresh meat rack.


Our journey headed south to the romantic city of Luang Prabang. It’s a Unesco World Heritage site because of confluence of traditional Lao urban architecture and French Colonial architecture. It also contains a vast number of Buddhist Temples within Luang Prabang, although most were destroyed because of the various wars the people have endured throughout their history. 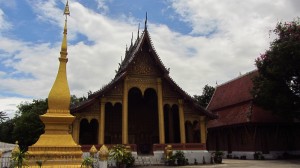 One of the Many Wats (Temples) We Visited

There are still a number of temples that anyone could visit and we chose to visit some at the end of the peninsula within the city where the Mekong and the Khan rivers meet. The temples are similar to the ones we saw within Thailand but not as pristine. We could see the wear and tear that is present in the temples and appreciate a beautiful mosaic art piece. Somewhat belatedly, Buddhism is on full display each morning here; around 6am every day the monks walk around the city to collect food offerings from locals and sometimes from tourists. It’s really interesting to observe because one, watching a hundred or so monks draped in saffron-colored robes walking around in city in the early morning sunlight is visually striking, and two, being that Laos is extremely poor, the offering given by the locals is special because on some level it can’t come easy to them monetarily speaking and when you reflect on it you see the sacrifice by both the giver and receiver. 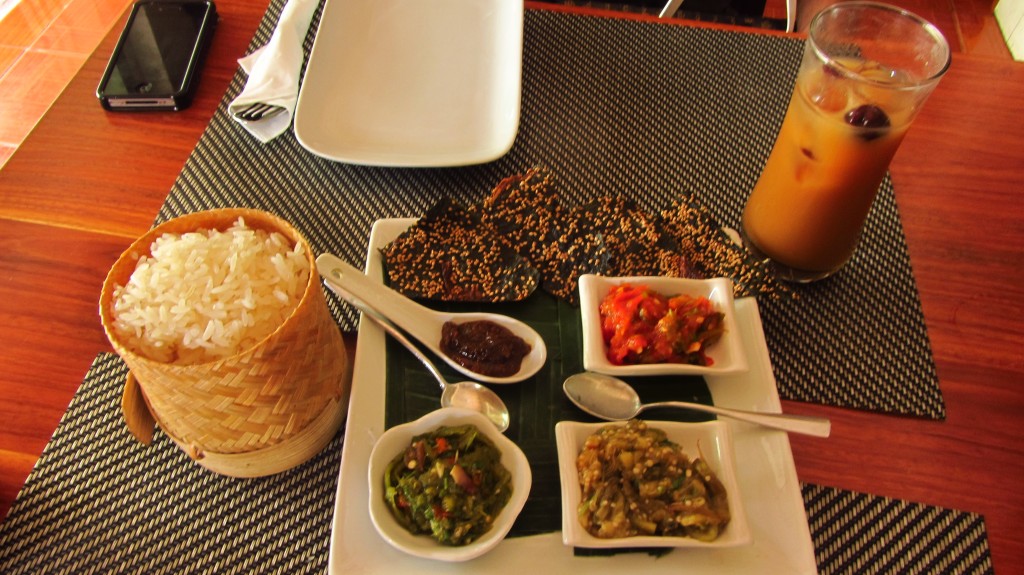 Speaking of food, we had some tasty treats here. Marcelo had some really delicious fish that was steamed in a banana leaf with dill, lemongrass and celery. We also had something that Northern Laos is known for, Joews. These tiny dishes are essentially dips and they are wonderful. 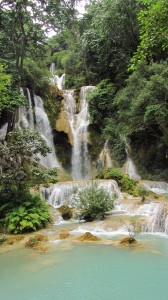 Two, both scrumptious, really stood out to us: one with eggplant which was mild and the other made with dried buffalo skin and would set your hair on fire it was so spicy. Luckily the restaurant we were at had some of the most unusal juice concoctions we’d had on the trip, some made with jujube fruit (similar to plum), hibiscus flower, and coconut milk. Finally we engaged in another cooking class and learned how to cook some Laotian treats, that hopefully we can reproduce when we get back home. Marcelo Swimming at the Falls

Our last activity here in the city was to visit a waterfall, Kwang Si. It’s a short ride out of the city but delivers a big bang for such a short distance travelled. I believe that architects and designers must come to this place to study how design expensive resorts. It’s an impressive series of waterfalls with chalky turquoise blue water cascading into small pools which are surround by small jungle green trees. We kept remarking to ourselves that this place looked fake,but it’s definitely one of the best waterfalls we’ve seen thus far.

Here’s our pics of northern Laos.

Central Laos is up next.

2 Responses to North by Northwest