Easing Into Thailand Was Simple 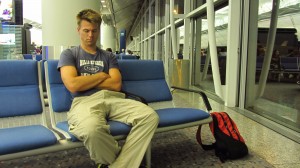 Exhausted But Almost There

Our trip in Asia did not start in Nepal, but in Thailand, where we spent a few days recovering from the seemingly endless 55 hour trip to Bangkok from Santiago, Chile. We could not have landed in a better place, however traveling for 7 months throughout Latin American left us somewhat unprepared for the first few mind-blowing days in Thailand. We were sad that we are only spending 3 months in this region. 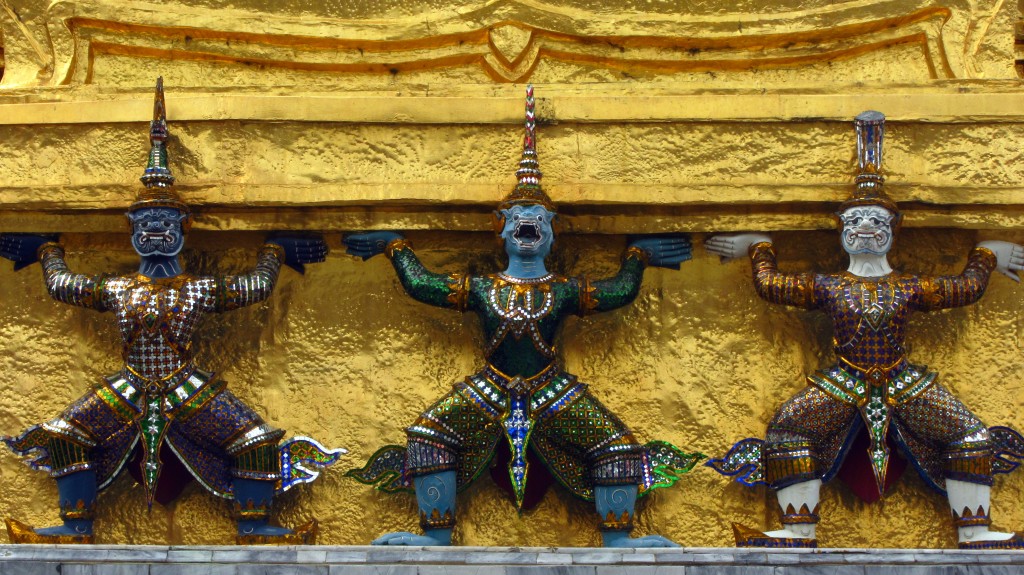 Gods & Demons in the Eternal Struggle 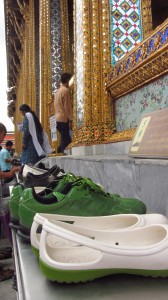 Shoes Taken Off Prior To Entering the Temple

We dare to say Thailand is the place to be in Southeast Asia. Why? Very simple, Thailand is where the modern world mixes in perfect symphony with milenar traditions. Anyone who lives in the western world could feel at ease in this country. Different from most of the Latin American countries, in Thailand services are generally very reliable and delivered very fast. Of course there are touts on the street who tell you that temples are closed and try to redirect you to do something else, but it is easy to find out for yourself and enjoy what is offered. 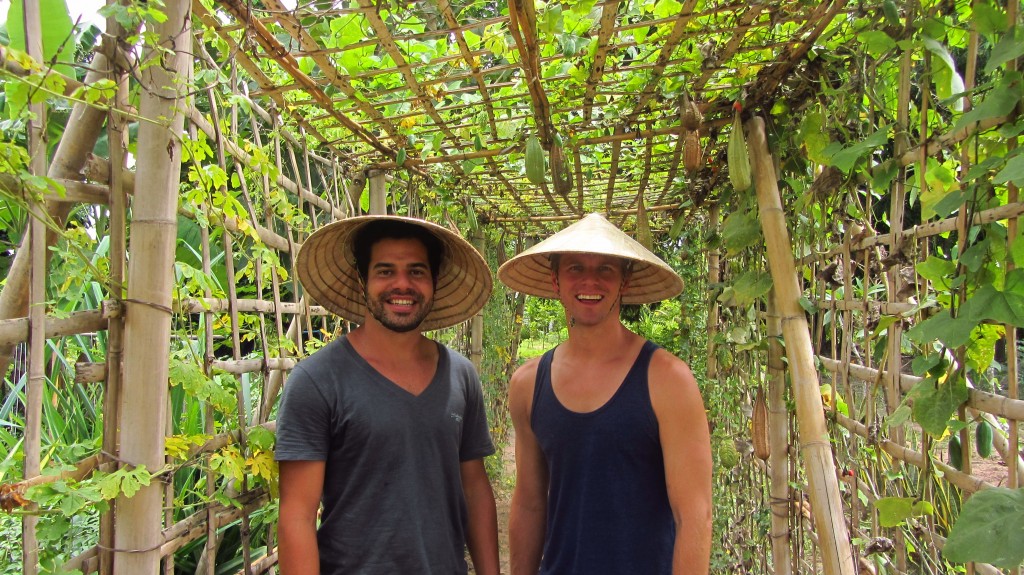 “The Land of 1,000 smiles” is full of westerners on the streets trying to get to know better this country and can we just say, “Good luck!” A few weeks here is just not enough. The country is about the size of Spain and has a population of 65 million people. A true tropical country with mountains in the north and amazing beaches ( we did not go there) in the south, Thailand has everything you need for a complete vacation. 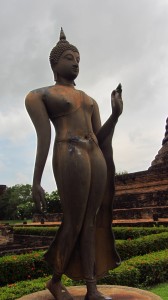 Thailand, proportionally-speaking, is the most buddhist country in the world. 95% of the population adheres to the 8 fold path and we could see how much buddhism is ingrained in people’s lives. Not only for the numerous temples in the cities, but also for the small shrines in almost every single house with offerings of fruits and candles to the gods. One of the most interesting philosophies put forth from Buddhism is “Life is Change.” It appears Thai people take this very seriously and just easily incorporate different cultures into their lives. 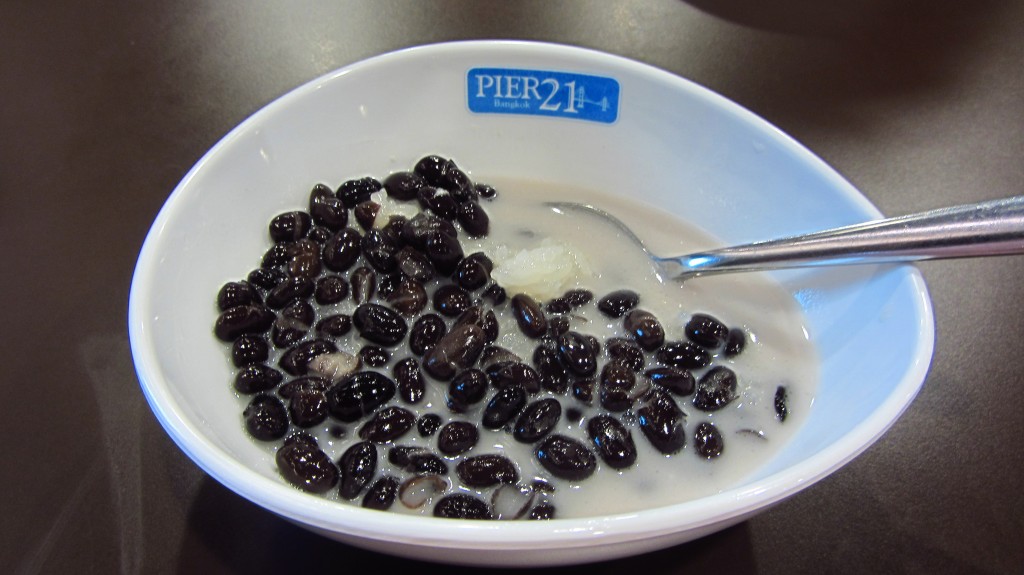 It May Appear Weird But Black Beans, Rice & Coconut Milk Is A Delicious Dessert

The food is simply AMAZING!!!! So many different dishes that can SPICE-up your life. Almost every single dish we ate was not only good, but spectacular. And there is no need to go to expensive restaurants. The best food was in the street carts that are set up on the sidewalks, making the culinary experience in Thailand the perfect introduction to Southeast Asia way of eating. Another culinary aspects of Thailand are the numerous exotic fruits and fresh produce we encountered in the markets. Fruit shakes are something out of this world. Everything is delicious!!! 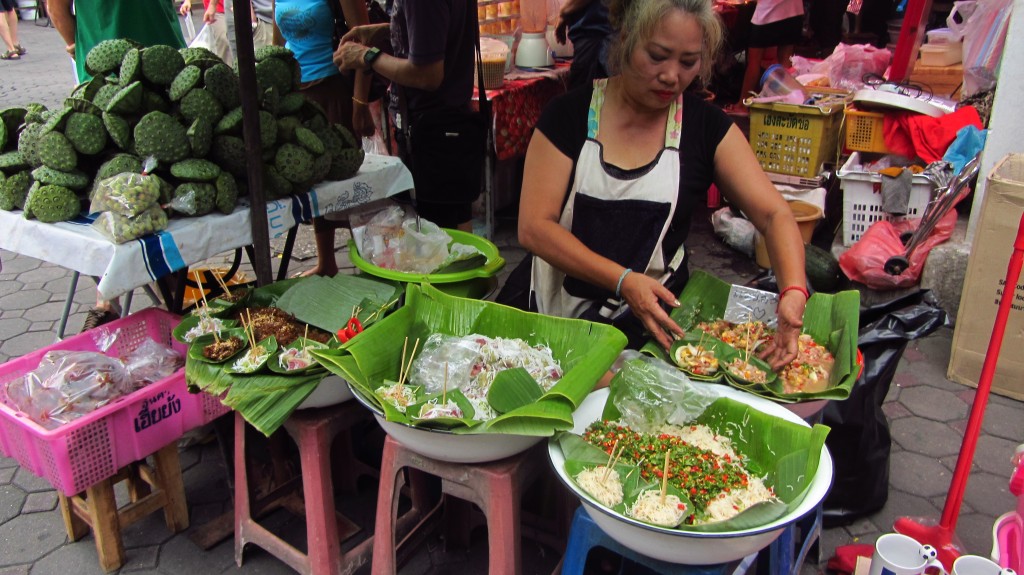 In Thailand transport is very easy. The country road system is nice and the service very reliable. There is also a decent railroad system, but we did not try. In one of the buses we took there was even a flat screen TV and nice seats, but no bathrooms. In the cities, an interesting way to get go around is to get a tuk-tuk, which is basically a motorized chariot. They are all over the place and offer cheap prices, but it is always good to negotiate beforehand with the driver. It is definitely annoying in some places, because you cannot step outside your hotels and several people come to you to offer you ride. 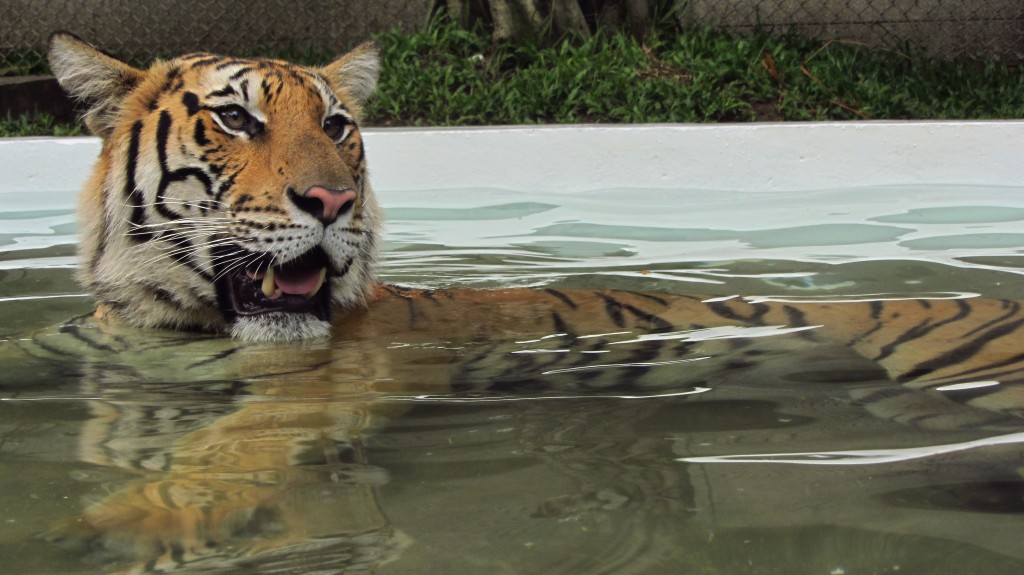 Economically, Thailand, was growing dramatically until the asian crisis started in 1997. Millions of people lost their jobs, but the country did well afterwards, despite some political instability. Over the past few decades the largest rice exporter in the world seems to be changing its known rural tradition to become a more industrialized country, attracting major investment of US and European companies interested in low costs of production. However there is a lot of concern about what is going to happen to Thailand when the world longest-serving head of state in history dies. The king Rama IX is revered like a God and he has been very sick since 2009. It seems that he is the only political force that brings the country together, so its better to come and visit sooner rather than later. 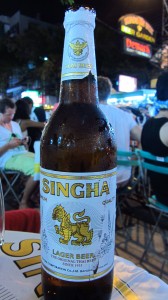 Thai currency is called Baht. One dollar is about 31 Bahts. Food on the streets cost around US$1-2 and in a restaurant US$3-5. Thailand has 2 main beers, Chang and Singha. None of them are really good and they cost around US$ 2.5-3 in a bar. A budget but very good hotel room is around US$20-25 in Bangkok, but the price goes down dramatically in smaller towns in the north, to as low as US$ 10. A 1 hour foot/body massage can be as low as US$5-8. 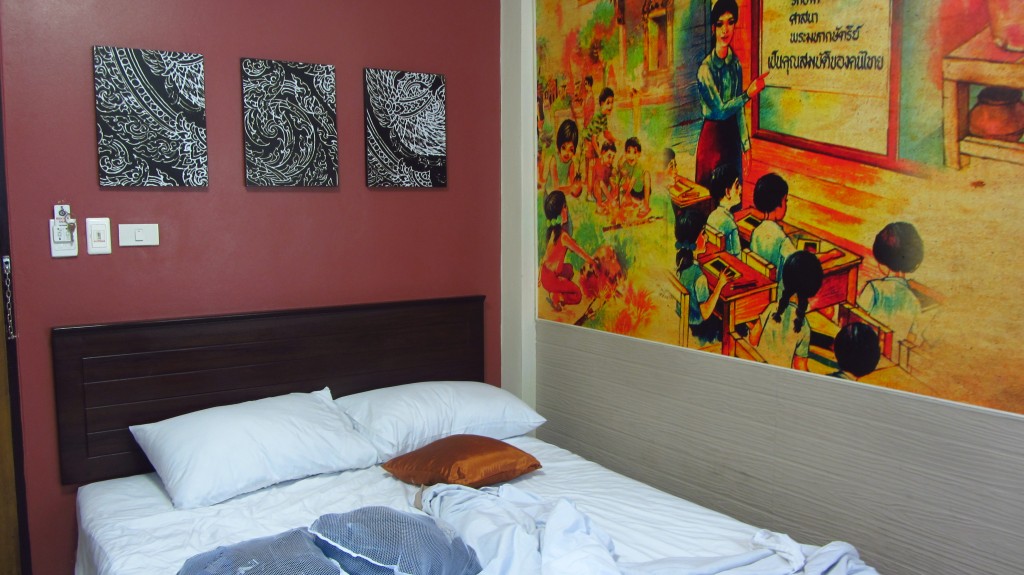 Our First Room In Bangkok - Descent & Cheap Too

Their language is notoriously hard to learn, because same words are spoken using different tones of voice. We stuck with Hello, thank you and sometimes we could recognize numbers. Although we missed a lot of the cultural aspects because of the inability to speak Thai language, most of the touristic places have people with whom we can have basic conversations. They also have their own alphabet, but we could see so many signs and billboards using plain english due to the millions of people who visit the country every year.

With beaches, mountains, temples, nightlife, fun people, shopping, food and animal tours, Thailand is said to have everything for a nice vacation. Definitely a place to return in the future and if anyone is thinking about an exotic place to visit, this is the best introduction to Southeast Asia.

Laos is up next!