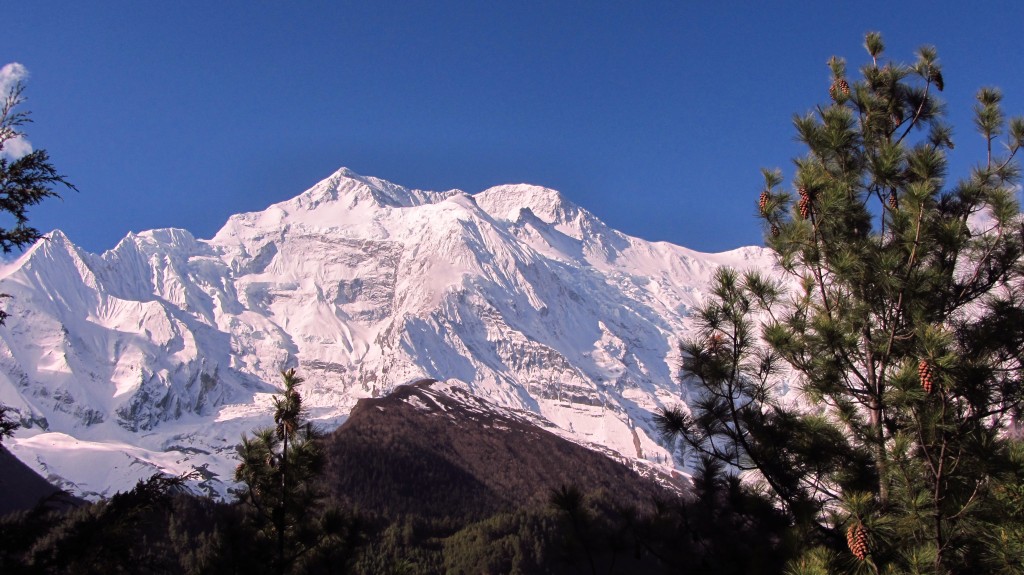 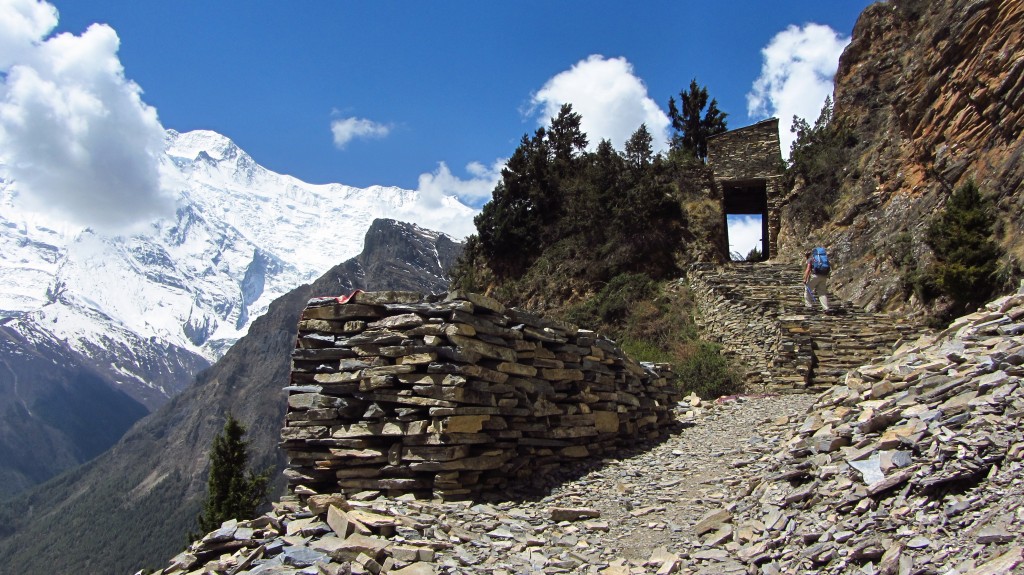 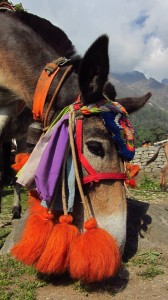 It was May 24th around 10 AM when we arrived at what trekkers call “the highest pass in the world”. No one ever defined this terminology but we surmised by our surroundings that it probably means the place where one can cross in between two big mountains just walking: In this case Thorung Peak with 20,157 ft and Yakwakang with 21,266 ft. We woke up that day at 5 AM to below freezing temperatures without any heating in our makeshift hotel room, just in a sleeping bag and blankets to see people and with their backpacks already going up the mountain to finish the last 1,600 ft climb to the top. For us it was even more special as it was my birthday (Marcelo) and this was a sort of pinnacle after 9 days of hiking in the Himalayas. 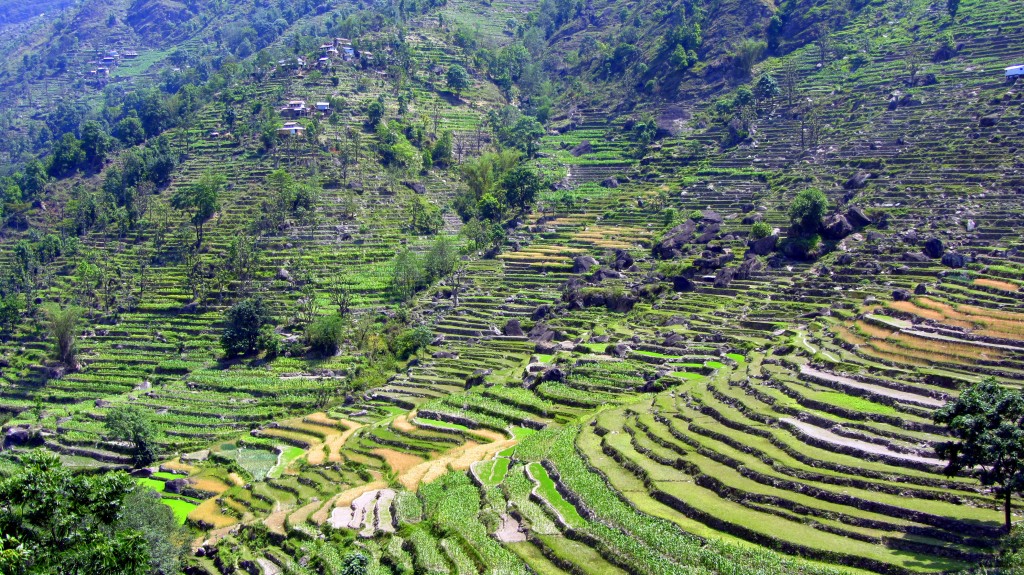 Rice Paddy fields on the Side of Hill

The Cute Little Town of Tal

The Himalayas are this gigantic mountain chain, the tallest in the world, that extends from Afghanistan(East) to Buthan(West), Nepal/India at the south and China to the north. It was formed millions of years ago when the Indian subcontinent crashed with the Asian plateau. Nepal’s north is all Himalayas and for that reason people from all over the world come here to see, trek, and climb on the worldwide famous mountains. Nepal, arguably, has the best hikes on the planet and it s not a surprise there are an array of trips one can do. The trekking to Everest base camp is supposed to be amazing and has the name of the highest peak on the planet, but after a lot of research we decided to do the most traditional of them. 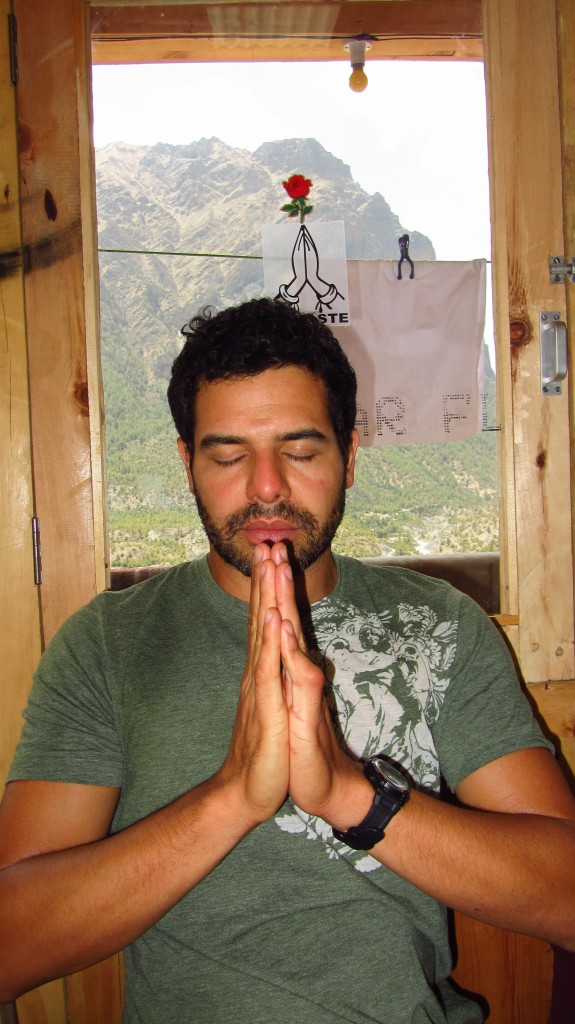 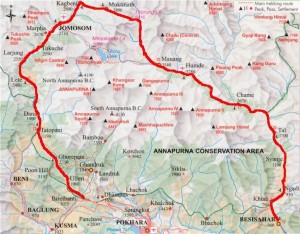 Annapurna is a mountain chain on the western part of Nepal and has been attracting trekkers for decades. The whole circuit which has a shape of an inverted U, follows the valleys of two rivers along the several mountains. It is approximately 250 Km and it takes around 19-21 days to complete. Over the past 3 years roads were built along the trekking route and a lot of people have been disappointed with the hike. Afterall it is not fun to walk along jeeps and dusty roads. But we decided to go anyways. We learned about some alternative trails that would skip parts of the road making it a more pleasant. Because of the longer time we had to spend in Kathmandu, due to health issues, we did not have the time to do the whole circuit. We only did half of the trail, a total of 122 Km in 11 days. 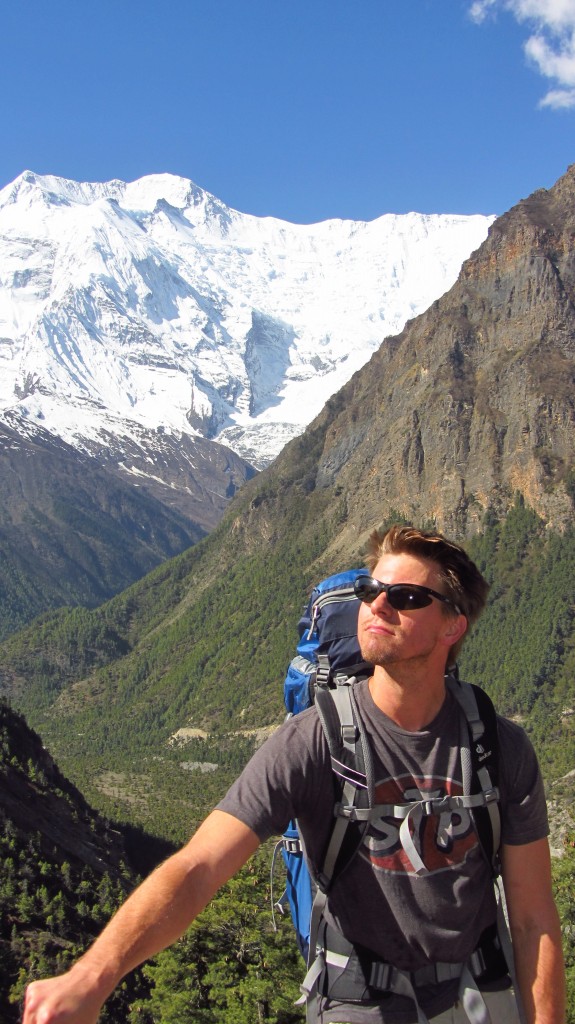 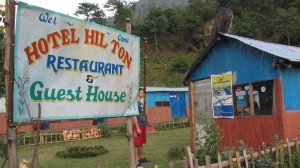 Our first day was the trip from Kathmandu to the beginning of the trail Bhulbhule, close to Besisahara, 8 hour drive on bad roads (this is Nepal). We just walked for about 1 hour until we reached the tiny village of Nadi and our first “hotel” was at the Hil-Ton. Check the pics below to see. The owner was a 21-year-old, extremely nice who wanted to know everything about us and said: “we may not have the best facilities, but we have the best hospitality”. The room price was US$0.50/night and we had to have dinner and breakfast at the hotel. Before tourism and roads existed in this region, people would walk from one village to the other just like we are doing. Crossing several miles, for multiple days they would rest, eat and sleep in people’s houses, what they call today: tea houses. Locals would just pay for food and very small amounts. The tradition is the same for tourists and we pay nothing or the max of US$ 2 for a room/night. The food, though, is more expensive, especially when you get away from civilization. 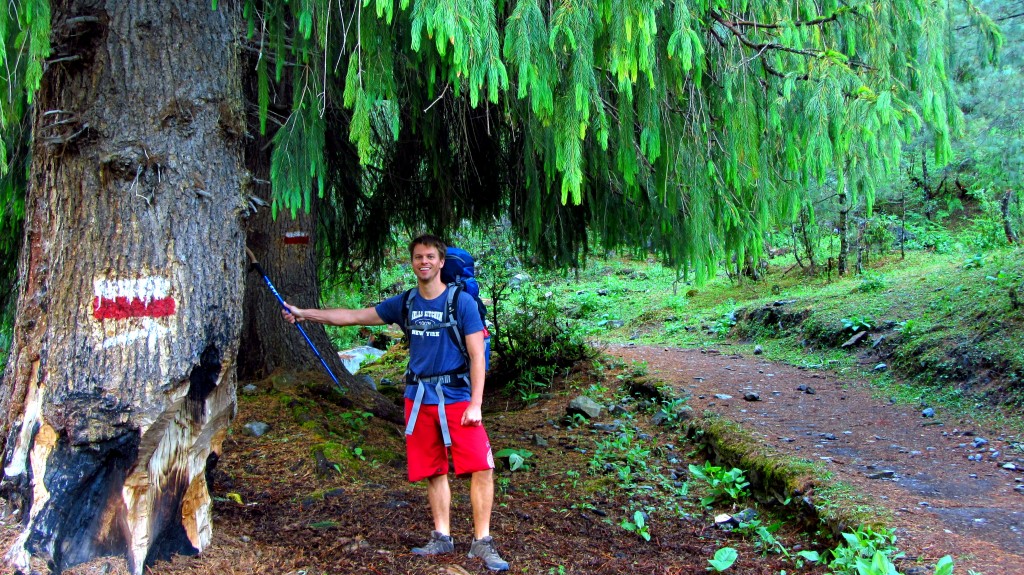 Mountain Shaved By an Ancient Glacier Happy in the Himalayas

The Annapurna Trek is great way to see ecological systems as you move up in altitude. From pictures of the Himalayas, one might get a false impression that it’s all snow rock and ice, but one of the best parts of this trip was the variety of different regions we got to walk though. At the beginning of the trek you see rice & corn fields set along side the mighty Marsyangdi river with tropical temperatures. The War of the Roses

Our trail led us up this river canyon where we saw the vegetation change and the temperature drop giving us a view of a huge pine forest. After the pine forest you come across a gigantic mountain face that has been cut by an ancient glacier. The higher we climb, the less vegetation we saw, the trees got smaller, the rivers went from raging current to a small mount stream, until we saw nothing except rock, snow or ice. It’s was quite the experience but then we began our descent into the dryest area where hardly any rain ever falls. 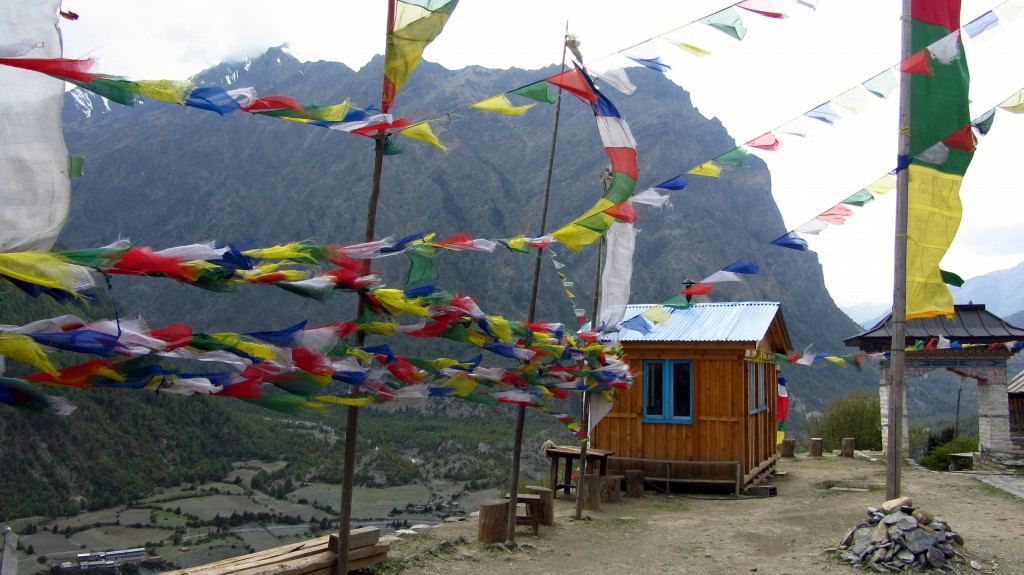 Inscriptions on the Rocks of a "Mani Wall"

Annapurna is not only a great hike to enjoy the environment, but it is also a cultural experience. We were able to start our trek watching how hindu communities live in the rural areas. On our first day the family we were staying had a 5 day old baby and they were getting prepared to have a small celebration to give her a name which, by the way no one knew. The higher hindu cast, called the Brahmins, are the only ones who can give the name of the child and there were a series of rituals to be followed. One of the Villages Along the Way

One of them was to give the newborn some cow’s urine. Remember the cow is a sacred animal for them. The other half of the trip we could see more the Tibetan buddhist influenced communities in the mountains and the women dressed with colorful clothes and piercings all over their face. They usually grow wheat, buckwheat and raise yaks and sheep in the meadows. The prayer flags and stupas were omnipresent in this area, making the landscape even more beautiful to watch. At the entrance of each town we could see rows of praying wheels and very nice carved stones some of them colorful and with really cool designs. We also met many nice people on the way, locals and tourists who made our journey a lot more pleasant after a long day walking.

Check out our pics of the circuit.  Another Annapurna Circuit post will be forthcoming. 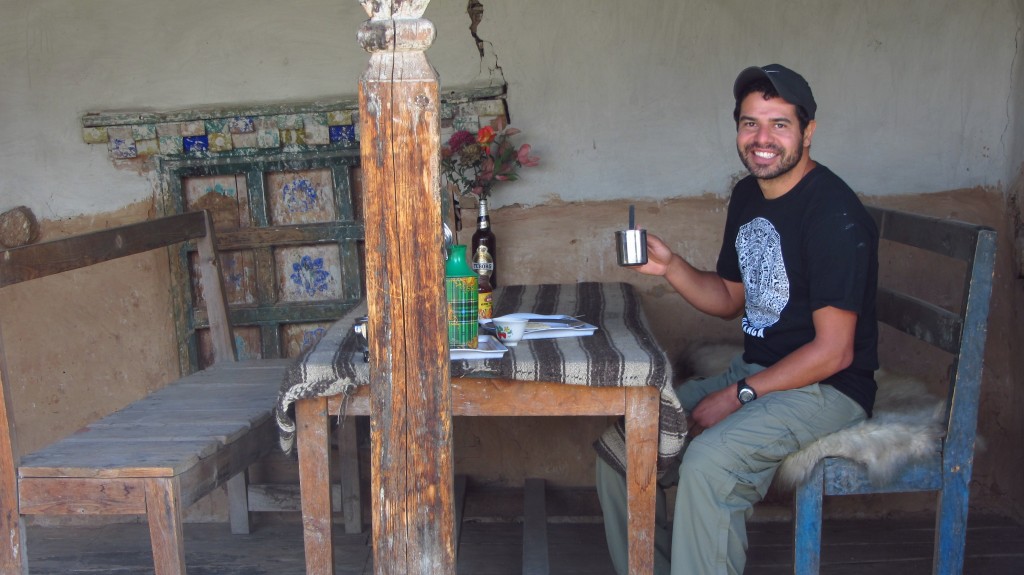 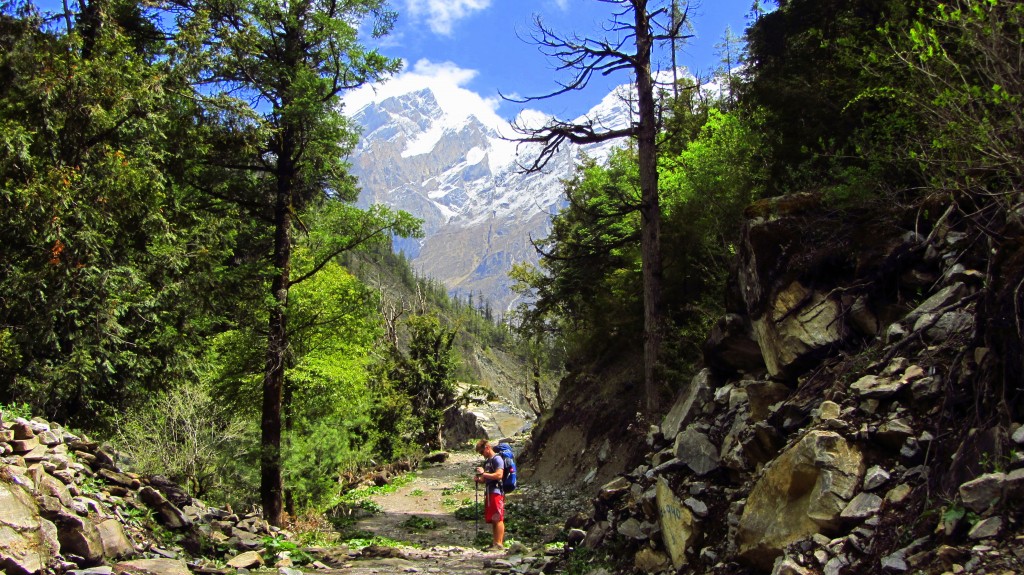 Dense Pine Forest Just Prior to the Beginnings of Upper Elevations