A little taste of Europe in Latin America 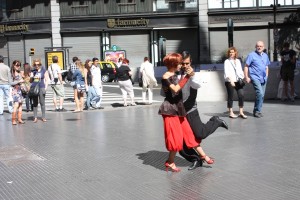 We traveled about 841 miles from Foz do Iguacu, Brazil for 22 hours on a bus to Buenos Aires, although not a memorable experience it was not that bad, since the buses in Argentina are quite good and we even had dinner on the way provided by the bus company. 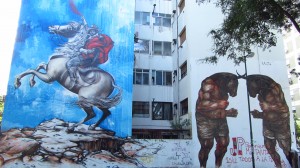 We spent a few days by ourselves exploring what the city had to offer and to our pleasant surprise, this city offered a graffiti tour. We LOVE graffiti and Buenos Aires has numerous areas to view the works of these street artists. BA is a little unusual in that a person needs to call the police and report graffiti being done in order for it to become illegal. Most artists actually asked the owner of a property if they can paint on a certain wall and the artists are generally painting in the light of day. The combination of factors really produces some great pieces. 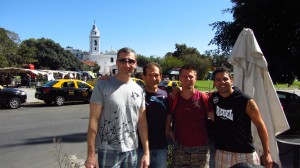 Off to See Ms Peron

After a few days of roaming the city alone, our friends Mark & Jeff flew into to visit the city and us as well thus vastly improving our already good time here in BA. It is said that Argentinians eat more beef per person than the rest of the world. We tried to do as the Argentinians and ate a lot of good beef, but also we had a great culinary experience while in the city. Cheap and delicious wine are readily available, empanadas (stuffed pastries) are at every restaurant and corner store, Italian food is nearly as ubiquitous as the Parrilla(restaurants that primarily serve meat), and we had some delicious Peruvian seafood dishes as well. 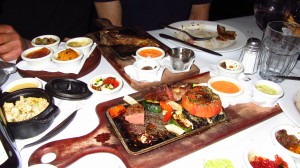 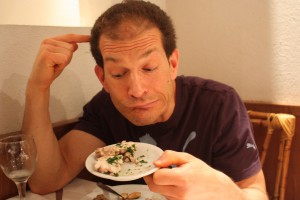 To Eat or Not To Eat 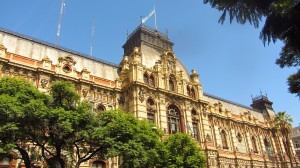 Besides the great food, Buenos Aires has some beautiful architecture. The city is well-known as the most european city of Latin America and at times we were impressed with the resemblance , especially with french architecture. The most famous building, Casa Rosada (the Argentinian version of the White House), is rumored to have been painted with the blood of cows which gives it a certain shade of pink. The Palacio where the Foreign Ministry is housed and is a beautiful mansion that used to belong to a wealthy family in the early part of the 20th century. Along with many other beautiful European influenced buildings, BA has its horrific buildings as well. Much in the same vein as Boston’s city hall, Argentina’s National Library should be vacated, blown-up, redesigned and rebuilt. It’s hideous! 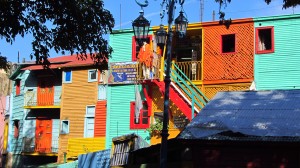 The city has a lot of cute neighborhoods that each have their on signature. San Telmo for example is kinda run down but has a certain flare; we had visited it on Sunday and there’s a huge antique market happening. El Caminito, a few blocks in La Boca (Large Neighborhood) is super cute; the houses in this small section of La Boca as corrugated tin and are painted in colorful tones. The neighborhood has its share of great graffiti as well. Recoleta, Retiro, and Palermo are the most affluent areas with gorgeous houses and buildings and the world-famous Recoleta cemetery where Eva Peron lies. It was interesting to see the importance the people gave to appearance even after they died with its over-the-top architecture and sculpture filled cemetery. 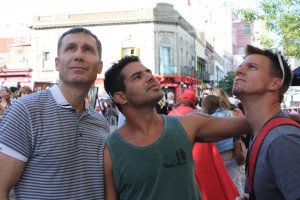 Where to Go Next?

In BA we visited an unforgetabble american exhibit at the museum of Latin America of BA where we could see giant George Bush dolls f’ing pigs (I know it was crazy); the Casa Rosada Museum; a tour at the gorgeous Teatro Colon (considered by many to be the best opera house for acoustics in the world) and the museum of Decorative Art, a massive art collection from a filthy rich family from the early 1900’s which was housed in their mansion.

Mark and Jeff were the last friends we are able to visit during this trip. We had great time, drinking wine, exploring BA, eating good food, visiting museums and having great conversations about life. We rented an apartment in a great location for U$85/night and it was the smartest thing to do. The week was so relaxing and BA treated us so well, but we knew we had to go back to our backpacking reality very soon and head to Patagonia.
For more fun pics of BA, just click here.

Up Next, the Argentinian Patagonia

4 Responses to A little taste of Europe in Latin America