It took us 2 days, close to a 1000 miles, and more than 20 hours to drive from the state of Bahia to São Paulo. Our road trip revealed stunning landscapes full of mountains and valleys with dry vegetation and as you move further south, more mountains and valleys but with lush green vegetataion. The road at times was very dangerous as we got closer to SP, due to the abundance of eighten-wheelers driving fast on twisty-turny highways, but we arrived there safe. Take a look at the map and where we stopped to spend the night. 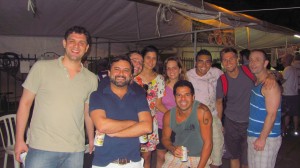 I imagine that most people have heard about São Paulo, but here are some crazy numbers associated with the city:

1.  The city is home to 11.3M people while the metro area contains around 20M.  With the area that this massive city encompasses, there are about 18.5K people/square mile.

3. There subway system transports around 7M people on weekdays. Also on our way out of the city, we counted an 18 lane Highway and the traffic is still considered horrible in this city.  More subways and less cars please.

At Joao's with Good Friends

We spent a few days in Sao Paulo visiting our friend Joao who was our gracious host and cooked an amazing seafood stew for us. Other highlights were  a trip to the city’s market, picking up our friend Justin who had flown in from NYC and travelled with us for the next nine days spending Satuday afternoon at another famous market in SP and finally The Week, a gigantic club.  The market was the best we have seen yet; the sheer size, quality, and variety the market had to offer was outstanding;  it’s a shame Boston doesn’t have something of this caliber. 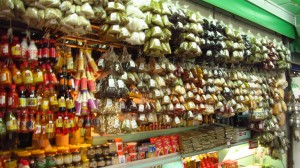 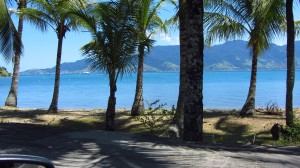 After a fun weekend with some friends, we headed to the Paulista North Coast toward the city of  Rio de Janeiro. We first spent a day in Ilha Bela where we got there by a 30 min ferry.  Ilha Bela is indeed beautiful, full of cute little beaches, waterfalls and hiking trails.  It was a great place to stop over and take in the beauty. 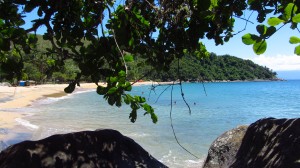 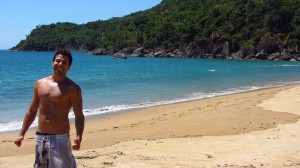 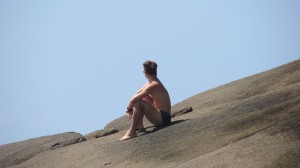 Continuing northward we stopped off a the surf beach town of Ubatuba city.  It’s really more of a vacation home town, not too many stores or restaurants, but the beach makes up for it with the gigantic waves that are produced here.   The road we took to arrive at these places is called Rio-Santos and is one the best road trips we’ve ever taken,  The roads winds through the mountains and rain forest and you get to see some beautiful coastline landscapes along the way. 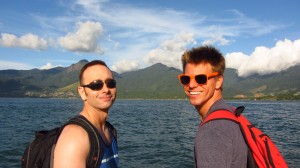 To take a look at some of our photos.