We were only getting fat and happy in Mexico

Posted on November 21, 2011 by itinerantfling 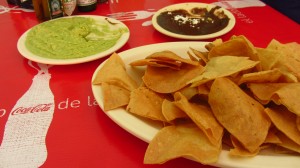 Chips and guacamole, the perfect marriage

Mexican food, although similar to Tex-Mex, has lots more flavor and enough spice set your mouth ablaze if you like. Above all, it’s super delicious.

It’s better to talk about the Mexican cuisine by regions, since each place we visited was quite different. It’s like the US where you get a completely different food if you go to Louisianna (cajun/French dishes), New Mexico (southweastern) or San Francisco (Asian influenced cuisine). We mainly stayed in these 3 different regions: Oaxaca, Guadalajara, and the Yucatan Peninsula .

1. Cocina Oaxaqueña – Oaxaca is famous for its moles. This kind of sauce made of chocolate that you marinate mainly with chicken and meat. In Oaxaca they have 7 different kinds of moles, one for every day of the week. 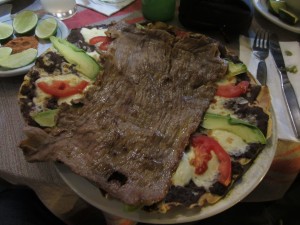 Another dish we really ennjoyed was a kind of pizza in which the base is a gigantic corn tortilla called Tlayuda. I cannot forget the most strange plate we had with grasshoppers and the Oaxacan coffee and chocolate which are very famous throughout Mexico. Finally I have to mention the tamales filled with chicken that are just amazing in the region. 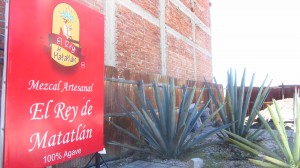 The most traditional drink is called Mezcal, a sweet, stronger form of tequila that you sipp with orange instead of the tradicional lime for the tequila.

2. Cocina de Guadalajara – When we got to Guadalajara we had to become familiar with all these new names in the restaurants. First the Pozoles, a soup with chicken, beef or seafood. Then the Pipián sauce that also can be marinated with different kinds of meat. What we like the most was Sope al Pastor, tortas ahogadas and the menudo, which is a tripe soup that people in the region eat for breakfast. For the first meal in the morning we used to have tortilla chips with eggs and a red or green sauce that were one of the best food we had called chilaquiles.

Evidently I have to mention about all the tequilas and margaritas we had in the Land of Tequila.

3. Cocina Yucateca – Lastly the cuisine we liked the most. Very influenced by the Mayan culture it is somewhat similar to the Guatemalan cuisine which is also very Mayan influenced. After much talk with people from the Yucatan one of their secrets seems to be that several dishes are marinated with a type of sour orange that is found in the region. 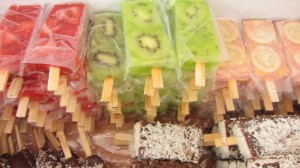 The best popsicle ever, only real fruit, no sugar added

The most known dish is the fatty Conchinita Pibil which pork shoulder in a sauce full of spices and is traditionally cooked in banana leaves. The lime soup is very simple, but “muy rica”. The Tikinxic fish also cooked in a banana leave melts in your mouth. Panuchos are a kind of tacos with black beans. All that you have the option to use some of the pepper sauces they have, the stronger one is the “habanero”, WOW just a tiny bit and your mouth is on fire. 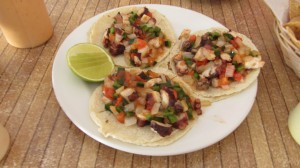 Finally I would like to make a special mention to the Tacos. These delicatassens are one of the best things in Mexico, nothing compared to what we have in the States. The corn tortillas (usually two) are covered with a large amount of meat, or chicken, or rib meat, or fish, or tripes, or tongue, or head meat, or sausage, or even brains. You can also find them on every corner and is very cheap, about US$ 0.5 – 0.75 each.

The only problem with mexican food is that for sure, you are going back home a little heavier, but it is all for a good reason. 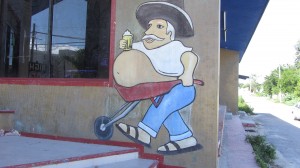 Some of the dishes we had are here.